Every would be great scientist has thousands of hours of careful research and study, and one moment of fortunate recklessness. 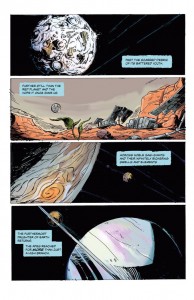 After the Gold Rush #1 presents the story of the farthest reaching lost daughter of Earth. She is a space scout returning to her ancestral planet after an attempt to discover even the smallest signs of life in outer space. The scout, in an abrupt crash landing, returns to find herself surrounded by rich and abundant landscapes. However, Earth is apparently void of any technology and our main character quickly finds she is not alone and Earth’s descendants may not be so welcoming.

Miles Greb sets out to blend interesting story telling with accurate and real science in After the Gold Rush. Clearly just the tip of the iceberg, this first issue ultimately felt a little brief and left me desiring a little bit more in terms of character development and interaction. The setup however is very intriguing, mysterious, and certainly grabbed my attention. The big reveal, which is detailed over the last few pages, certainly shows tons of promise for the book and will certainly hook a reader looking for a good sci-fi story. I have to say the story’s real success comes through the stellar art. La Russa does a fantastic job of detailing the book and draws and inks some beautiful full page spreads. The art matches the tone of the book, pairing well with the lightly humorous and science-fiction based writing and excels at depicting Greb’s story in visual form.  With Michael Shephard on coloring, the art portrays a vivid and lush planet Earth.

Verdict
If you are looking for a blend of science and story-telling, buy it. Although this first issue is ultimately light in terms of dialogue and character development, Greb still develops a very interesting story through Isaac La Russa’s impressive art and inking. The building blocks are there and the issue showed tons of promise, making this book very deserving of your attention.  If the last few pages are indicative of what is yet to come in this series, readers will be in for a very interesting story.