In the back matter of Harrow County Volume 1, Cullen Bunn mentioned that the original title for come was Countless Haints. He later decided to change the name to Harrow County as he felt that it granted him more opportunity to explore the lives of just not the haints lurking in the woods, but also the townsfolk and their lives that made up all of the titular location. Now, with the first two arcs in the can, it seems Bunn is doing just that. After a standalone issue illustrated by guest artist Carla Speed McNeil, in which we learned the origin of the Skinned Boy, Tyler Crook is back behind the brush to further introduce to Bernice, Emmy’s best friend, and the town of Mason Hollow.

Though Mason Hollow has a clearly distinct culture and history from Emmy’s town, the two remain connected through the shared history they have relating to one Hester Beck. In learning about Mason Hollow, one question that has ever so slightly tickled at me since the beginning of the series is sufficiently answered. Having started a series with the execution of a witch led me to think the story took place in late 17th century New England, but that notion was swiftly dispelled throughout the series. As the series progressed we saw the relationship between Emmy and Bernice develop as well as the sighting of a small number of cars making their way into the scenes. This quickly jumped up the time frame to the early 1900s. After the introduction of Kammy, it seemed that Harrow County was located just a brief drive from New York City and from the brief glimpse inside Kammy’s home, the art deco design placed us around the 1920s. Now after learning of Mason Hollow and the adverse effects it was currently suffering from as a result of prohibition, that time frame is confirmed.
It’s an interesting choice for a time to set a witch story, and one that I personally greatly appreciate. It’s novel with regards to witch stories and opens Bunn and Crook up to a lot of opportunities to explore America’s industrialization and religious dissonance it experience starting around the time Harrow County is set. 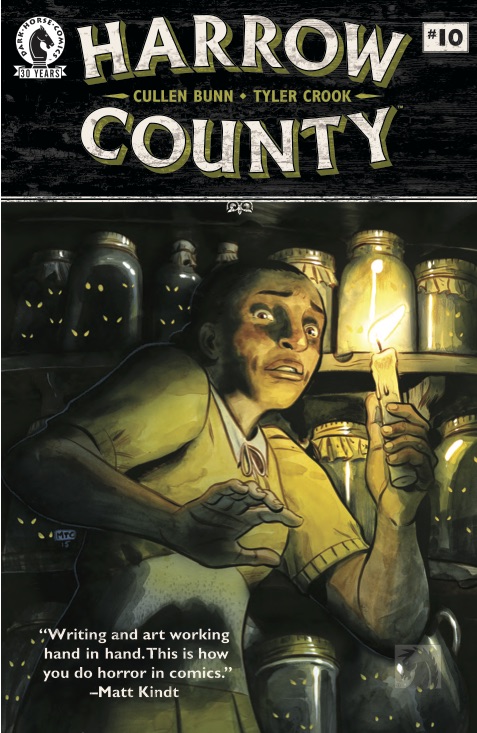 On the other hand a new question has come to mind after reading Harrow County #10. A scene takes place in which Bernice discusses a memory her grandfather has recounted to her multiple times before. In the memory he is a young boy swimming in a nearby watering hole when he first meets the seemingly new antagonist of the comic, another witch named Old Lady Lovey. I’m excited to see Loveys introduction as it looks like Bunn and Crook are going to move away from the American/European notions of witchcraft for a while and explore the Afro-Caribbean ones. However, it’s something Bernice notes after the memory is finished that really caught my attention. She notes that she has though she has heard this story from her grandfather before, she knows it cant be real. Her grandfather, like much (all?) of the older population of Harrow County, was created by Hester Beck. He came into this world a fully formed adult man, and it follows that all of his memories were also fabricated by the witch. It’s a brief touch on the philosophical theory of Last Thursdayism, which I find really intriguing and hope the creative team will further explore.

On it’s surface, Harrow County, feels a lot like a somewhat superficial ‘Monster of the Arc’ comic, but it has time and time again touched (only ever so lightly) on deeper philosophical concepts like Duality and Existentialism. If Bunn and Crooks continue this blend of easy readability and light philosophical exploration, I think that Harrow County can continue to be a geniuinely enjoyable work for a long time.

Speaking of genuinely enjoyable, after his absence from the last issue, it is a delight to see Crook’s forebodingly-tinged yet still whimsical watercolors rejoin Bunn’s writing in this issue. The art style for this book is something that I think really elevates the series to success. The loose lines and bright colors constantly give us a sense that we are in the midst of a dream where monsters lurk around every turn. After all it might actually be a dream, everything might. Maybe we have all just been created this very moment on the whims of an all powerful witch capable of instilling a fabricated fully detailed personal history in our memories.

Verdict
Buy it but… the arcs of Harrow County seem to be sticking to a relatively short 4-issue pattern, so I don’t think you’d be remiss if you trade-waited on this one.