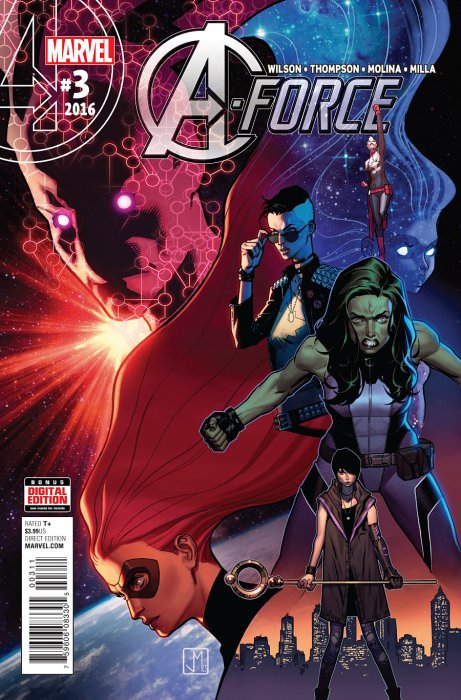 By now, fans of this title know that this is the estrogen filled version of a super hero team. Captain Marvel, Medusa, She Hulk, Dazzler, and Nico Minoru(of Runaway’s fame) were all brought together by the strange female energy entity dubbed Singularity in an attempt to take down a powerful foe named Antimatter. Issue #3 continues this battle from the streets of Miami, to the home base of the team, the Alpha Flight Low Orbit Space Station. When it’s all said and done, this all spells big trouble for one of the girls!

Once again, the writing here is both action filled and at times, light hearted with the banter between the ladies. Thompson and Wilson know their characters and you feel like the two of them have written these particular characters for a long time, not just 3 issues. The back and forth between the meshing personalities of some of the team members is some of the best stuff I’ve seen in a while. They show the hardships of meshing as a team when you have strong personalities that don’t always blend easily.

The artwork continues to be awesome, none of the women are “oversexed” or scantily clad, the costumes are great and fit the characters from Captain Marvel’s uniform to Dazzler’s athletic apparel. Jorge Molina is very good at facial expressions, and  gives us great locations. The colors look great as this is a colorful group, and have been fighting in very divers locations, from Mardi Gras like backgrounds, to deep space.

VERDICT
Buy it. A-Force is proving to be one of my favorite titles. I was a little apprehensive of an all girl team as it’s been tried before, and with the much needed diversity push in the industry, I thought it might come off gimmicky, but the creative team has consistently been telling a strong story, the art supports, and to be honest, you hardly notice the girl power feel of this book in lieu of the way its put together and brought to you. It’s not too late to pick this title up and jump aboard.