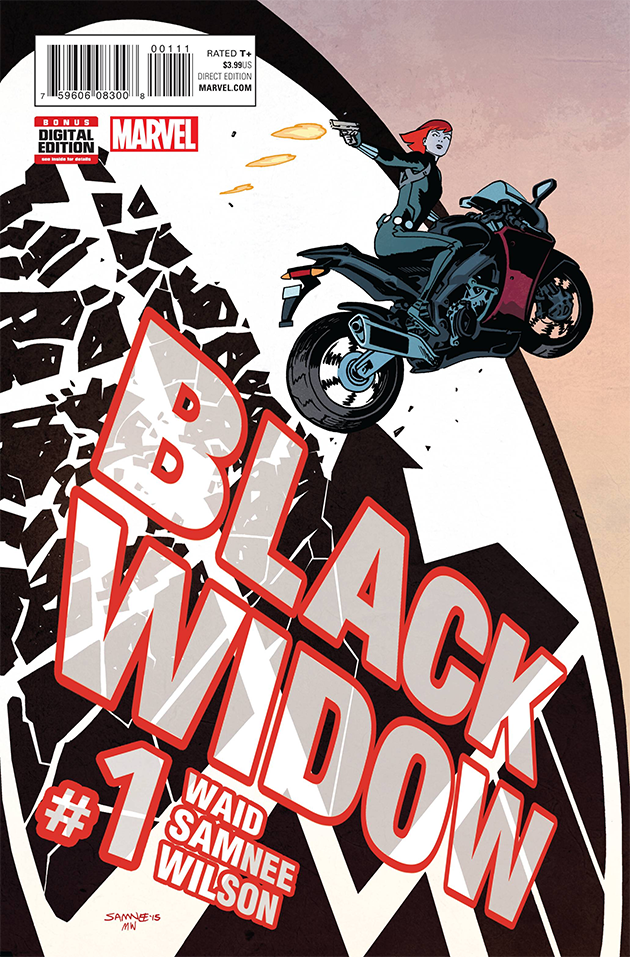 In this issue, our eponymous heroine finds herself on the wrong side of a SHIELD hunting party because she took something.

Black Widow #1 is a chase from start to finish (and then some, given the cliffhanger) Mad Max: Fury Road style.

As a #1, this book totally nails the “jumping-on point” concept. New readers literally have to have no prior knowledge to find the brutality and beauty of Natasha’s attempted escape completely enthralling and engaging. Longtime fans of the Widow (::raises hand::) will recognize her grace and her grit in each and every panel. The centerpiece sequence features Natasha’s bold course of action to get off the helicarrier. The action is big and bombastic, but also quintessentially Black Widow in its precision and style. When a character comments on exactly that distinction in the next panel, I found myself saying “damn straight, dude—she’s Natasha Romanoff.” No matter your experience with the character, you’ll have to agree.

I adored the last Black Widow series from Nathan Edmondson and Phil Noto, and, in many ways, Waid and Samnee deliver a similar in media res cold open filled with action and subtle character beats. Some will argue that we may be light on story here—it’s literally a 20-page chase with little dialogue (Natasha has one line)—but the forward motion of Black Widow #1 is undeniably riveting. Furthermore, that non-stop visual storytelling is right in this creative team’s wheelhouse.

Waid and Samnee have often spoke about their synergy as “storytellers” on Daredevil. The way that they innovate and create perfectly reflects the larger mission and potential of comics: sequential visual storytelling. Black Widow #1 is a tour-de-force not because of its sparse dialogue or kinetic imagery, but rather because of the way in which the various elements—the narrative, the dynamic visuals, the stark coloring from Matt Wilson, the concise lettering of Caramagna—all come together in the perfect sequence across the too-few pages. What you get when you pick up Black Widow #1 is a masterclass not in storytelling, but specifically in comics storytelling.

One thought on “Black Widow #1 Review”