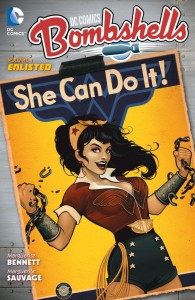 DC Bombshells Volume 1: Enlisted collects issues #1-6 of the hit series and introduces us to a host of DC’s lady heroes. Batwoman is Gotham’s resident bat-vigilante and a knock-out baseball player, Wonder Woman and Mera are royalty and close friends seeking adventure, Supergirl and Stargirl are sisters and belong to the Russian all-woman flight squadron The Night Witches, and Zatanna is a double agent playing the part of an entertainer for Nazi soldiers.

DC Bombshells is an uchronia universe where the female heroes came first. Because of this, the origin stories of the characters are anywhere from slightly tweaked to downright rewritten as Bennet explores this alternate reality. With the fictional characters of DC being overlaid on actual historical events there’s massive room to invent, rework, and explore. As Bennet takes the oft-told tales of World War II and puts the lady superheroes right into the middle of it, it becomes something new but also history class familiar. Taking facts from our universe and overlaying them with (mostly) only female superheroes is one of the cleverest things any comic has done in a while.

Besides a clever hook of historical fiction, what’s going to draw (no pun intended) you immediately into DC Bombshells is the art. It’s bright, it’s beautiful, and it fits the time period with its stylized art-deco war propaganda look. None of our female characters are ever in panels just as eye candy even though they’re all so beautiful. They have a purpose and they’re going to do what needs to be done, which is, of course, kick butt. Everyone is expressive, with energy and life in each movement, ample action sequences keep the eye moving quickly back and forth, and the colouring is gorgeous with a vivid, watercolour-esque style.

Verdict
Buy it! With the actual female heroes of World War II so often overlooked in history, having comic stories centred around female characters makes DC Bombshells an amazing stand-out hit. The art is pin-up perfect and the story is a brilliant mix of World War II history and an alternate timeline where DC ladies are leading the fight and being just plain bad-ass. Do your part for the war effort and pick up DC Bombshells Volume 1: Enlisted today!