This week’s recap will focus on Episode 9 of The Shannara Chronicles which aired Tuesday, February 23rd, 2016. Warning: Expect massive spoilers.

We left off last episode with rescuing Eretrea from the human settlement. One of the injured men from Utopia informs Eretrea that she is special; her blood is important to this mission. As well, with the death of both the king and his brother Arion, Prince Ander must now take control of the throne and with the war. The episode ended with the trio facing the (destroyed) Golden Gate Bridge.

The episode opens with the gang finding the entrance to Safehold – which derives from a run down sign of San Francisco and Oakland. Because the bridge is destroyed, they discover that they must travel through an old subway system. Back at the castle, Bandon and Allanon try to connect with Amberle. Bandon sees that she is alive in one of the man-made cities. Allanon notices that Bandon is still weak from his captivity with the Dagda Mor and informs he must still train. King Ander argues about his control over the throne with Councilman Kael. Allanon and Commander Tilton inform Ander that he is capable to control the throne. In the tunnel, the trio separates to look for any leads into the location of the Safehold. Amberle finds smoke in tunnel an goes to investigate only to find a group of sleeping trolls. Amberle finds them just as Wil and Eretrea were opening up about their pasts. They decide that they will use the pipes above to cross over – and notice that the carving on the wall resembles the tattoo on Eretrea’s back. Following the symbol, they find a ladder that will lead them above ground.

Back at the castle, Councilmen Kael intends to take the throne and tries to gather members from the elven army to her side. King Ander warns them of the power of the demon army, but realizes the council does not trust him – he sends Commander Tilton to bring a letter to the gnome, Slanter, in order to gain the help of the gnomes. He begins to train some other elves out in the courtyard and demonstrates fighting techniques with Bandon. However, Bandon is weak and still feels the power of the Dagda Mor within him. Because Bandon is so hostile towards Allanon, the Dagda Mor feeds off this anger. As Ander begins to swordfight with Bandon, he begins to hear the Dagda Mor’s voice telling him to kill the king. Thankfully Allanon steps in before anything happens and requests to speak with Bandon alone. Bandon and Catania are speaking in a room alone and he explains to her that he feels like a pawn, to both Allanon and the Dagda Mor. As they begin to get a little frisky, the Dagda Mor becomes more powerful and Bandon be

gins to choke Catania. In the tunnel, the ladder leads the trio into a room where Eretrea states she has been in before. They find the tattoo/symbol amoungst many things around the room, some with the words “Fili Apocalypsi” around it. As Eretrea looks around the room, she becomes entranced and hears voices; she sees the Bloodfire. The tattoo are her back begins to form a longer map along her arm, like branches. She becomes one with the map and is able to bring the trio closer to the Bloodfire’s location. The enter what seems to be the ruins of a church and they see the image from Amberle’s vision on a glass stained window. Once the symbol lights up on the floor, the guardians of the Bloodfire attack them. They begin to play with their thoughts as a means to the trio against one another.

King Ander walks into a meeting and realizes that Councilman Kael is committing treason against him. She commands that Ander be taken to the dungeon, as he is not fit to be king. Commander Tilton makes it to the cave where the gnomes are hiding and provides Slanter with the letter requesting the gnomes help. At Safehold the witches begin to feed on Eretrea’s weakness over being the non-elf in the group. Eretrea and Amberle begin to fight over this, and Wil steps in to stop them, accidentally cutting Eretrea’s hand. Her blood begins to float onto a glowing statue in the middle of the room. The guardians begin to scream, calling Eretrea a “child of the Armageddon”. Her blood fills the statue, and a fire ignites (Bloodfire, get it?). Wil uses the elfstones to fight off the guardians to give Amberle time to enter the Bloodfire. They worked for once, and the fire disappears – along with Amberle.

At the castle, Allanon informs Bandon that his feelings for Catania have made him susceptible to the Dagda Mor’s tricks. Bandon begins to use his magic to attack Allanon; worried that it is too late to save Bandon, Allanon kills him. Commander Tilton and the gnomes retrieve Ander from his holdings within the dungeon because they have decided Ander is the king the four lands need. Together, they enter the council room and inform the elves that working with the gnome army is their best bet as they all have a common enemy. The elves realize the mistake they have made and kneel in Ander’s honor. They must now await Eretrea’s return as the last leaf has fallen off the Elcrys, now releasing the Dagda Mor’s captivity and creating a war. 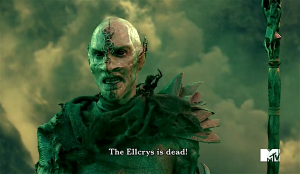 Verdict? A great episode! If you’ve been reading these recaps, then it should come as no surprise that I am so happy Eretrea was essential to discovering the Bloodfire – even better, that she literally was the Bloodfire! I am so excited for the season finale on Tuesday, and I hope they take the time to explain what happened before all this (the apocalypse, the children of the Armageddon, war of the races). I cannot wait to see how this story unfolds.