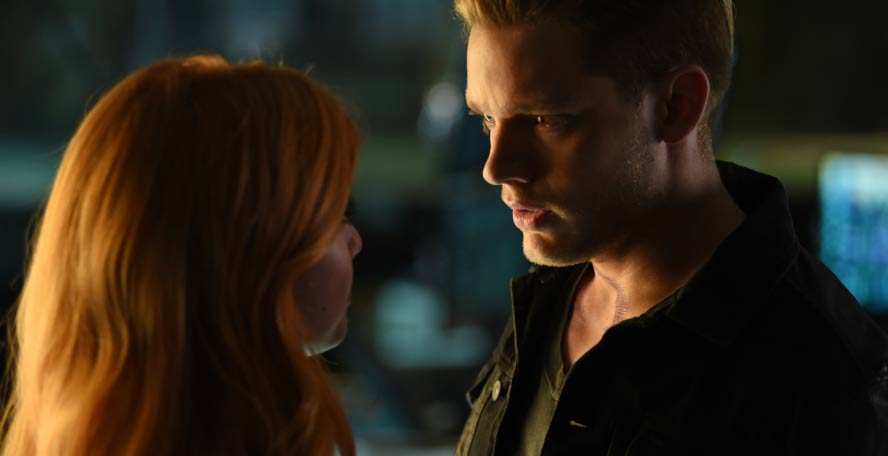 Last episode ended with the gang curing Luke from the alpha werewolf poison thanks to Magnus Bane. A healed Luke reveals everything Clary needs to know in order to figure out the location of the Mortal Cup. Magnus Bane grows closer to Alec while Isabelle breaks ties with Meliorn. As well, Simon begins acting less and less like a mundane.

Clary believes that she knows where her mother hid the Mortal Cup. If her powers of transferring objects onto paper is hereditary, then her mother must have hidden it within the tarot cards Dot had… which means it could now be in the hands of Valentine.

No worries though, Luke informs them that he has the cards in his desk at the office. However, the police station is overrun with Valentine’s spies, so they must be discrete. When there, Luke asks them to wait outside in order to avoid any unwanted attention. Once at his desk, an officer from internal affairs comes to ask for Luke’s badge and gun. Outside, Jace and Clary watch as Luke is taken into questioning and decide to take matters into their own hands. Meanwhile, Simon wakes up that morning next to his friend and bandmate, Maureen. Simon confuses Maureen for Clary, which obviously upsets her. Back at the Institute, Isabelle finds her father looking for Alec as he needs his son to fill out some incident reports for the Clave – to which Isabelle happily obliges. She later finds out that Alec slept over at Magnus’s house.

At the station, Clary and Jace find Luke in the questioning room, to which Luke confesses he thinks believes he is a suspect in a murder investigation. He informs them that they should look in his desk for the tarot cards, as he didn’t have a chance too. Clary runs into Luke’s office pretending to fight with Jace in order to find an excuse to go through Luke’s desk. Officer Vargas tries to help Clary with her “boy problems” and reveals that Luke’s stuff is in the evidence locker upstairs and cannot be retrieved until Lu

ke is cleared. Simon is beginning to see things (hallucinations or blood everywhere) and starts to figure out his symptoms, by looking at WebMD. His mother and sister interrupt him as Maureen called them worried that Simon is on drugs. Frustrated with them, Simon slams his desk and cracks it in half.
Simon begins calling Clary frantically and notices in the mirror that he has vampire teeth. Alec and Isabelle meet up with Clary and Jace at the station. Alec distracts the security guard to obtain her key pass which Isabelle uses it to shut off the lights in the station. Clary and Jace use this time to climb the elevator shaft and enter the evidence vault. They find the tarot cards, but Clary is unsure how her magic works and thus, unable to pull the cup from the card itself. Once the leave the station, they encounter a lot of demon activity. Shax demons attack them, so they decide to separate and Clary must find her way to the Institute. She winds up being cornered by three of them and under pressure, finds a way to get the Mortal Cup and uses it to fight off the demons. She later runs into Jace, who asks to hold the cup for her. Suspecting it’s another one of the demons tricks, she stabs fake Jace and confirms her thoughts. Luke and Alec find her and they all make their way to the Institute. As they walk in, they see Jace ordering people to find Clary. Killing fake Jace seems to have taken an emotional toll on Clary and she decides to finally kiss him. The episode ends with Simon entering the Hotel du Mort asking if he has been turned into a vampire. Camille informs him that he is simply reacting to her blood within him. Simon is relieved and lets his guard down – only to have Camille bite him for real. 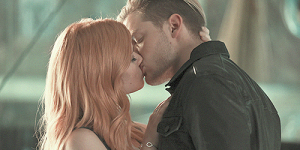 Verdict? Surprisingly, I really enjoyed this episode. I found it really expanded on the characters different strengths and personalities. As well, I enjoyed watching Clary relying on herself and not on Jace or the rest of the Shadowhunters to protect her. Of course, I loved the build up to the kiss throughout the episode (maybe it’s the romantic in me).