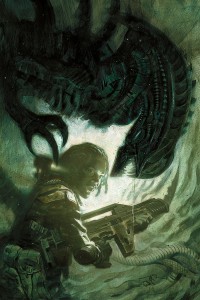 Zula is a Colonial Marine on a mission to investigate a derelict hauler, accompanied by a crew of synthetics. If you are a fan of the Alien franchise, as I am, you should already know that shit is going to get weird fast. I’m not a nostalgic person, so when new material is created based on something I love from my past, I try to give it a fair shot while expecting it to stand on it’s own two feet (or Xenomorphic extremities). Aliens: Defiance #1 did not let me down.

In the interest of avoiding spoilers, I won’t go much further in to the plot of Defiance. That said, I absolutely must express my excitement for a new lead protagonist in this franchise with the potential to carry close to the power that our beloved Ellen Ripley did. Zula already appears to be a well developed, realistic female character with fears, flaws and struggles that are the foundation of a quality hero. We know what she’s up against better than she does (for now) and she won’t survive without a fair amount of steel in her blood. I can’t wait to see where this character goes, in the capable hands of Brian Wood.

One of the most memorable aspects of the Alien films is no doubt the visual impact of H.R. Giger’s design of the alien itself and it’s planet. It’s no small feat to recreate this in a comic book, but Tristan Jones does a phenomenal job at it. The atmosphere of this world must portray a sense of suffocating isolation as well as a foreboding of danger lurking around every corner. I think Jones gets the weight of the darkness in this space just right. His treatment of the alien shows a respect for the franchise’s roots that I believe is a necessity to create this series right.

Verdict: Buy this! I mention the Alien films in this review a few times for good reason: in a sea of materials that have been created in homage to Alien, this new series stands to shine as it’s undoubtedly loyal in all the right ways to what made Alien and Aliens magical. Aliens: Defiance takes the reader on a fresh crawl through the black, ominous corridors of space haunted by brutal creatures whose only interest is the survival of their own species. The first issue is available April 27th.