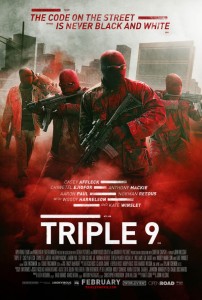 There aren’t a lot of films left that are completely original. It’s all been done before, more or less, so when you set out to make a movie (and I imagine to get a movie greenlit), you need to be able to put an all-new spin on what you’re doing. And not even specifically that you need some M. Night Shyamalan level twist, you just need to do something that somebody else hasn’t and in this case, it’s telling a great story to accompany the action.

Triple 9 is the story of a group of men who get in with mobsters and attempt to carry out two incredibly difficult heists for them. Motives and all that come into play down the line but what you get right off the bat is action, seeing how the team works together, and what they do to complete their objectives.

You’re immediately immersed into the film after the end of the opening heist scene and you’re thinking “Yeah! I’m into this!” but it all gets turned on its head. If you’re like me and didn’t know much about the film before seeing it (trailers ruin everything these days), the whole thing was a rollercoaster for me from start to finish. The pacing of the film is great and while it has a few quiet moments between characters, they don’t take away from the adrenaline rush you get throughout the rest of the movie.

The thing that sets Triple 9 apart for me from other action films is the fact that it felt SO grounded in reality (I am neither a cop nor a criminal heist mastermind so this is all speculative, obviously). You have your cops and you have your robbers in Triple 9 (and the crossover). The team of bad guys isn’t your average group of bad guys, they have tactical training and blah blah blah, this part is cliche but again, it’s how the story is told. Triple 9 walks you through what the guys with questionable morals (as Anthony Mackie said at the premiere) do and how they function and that’s with the leadership of one person who is setting the stage and telling them what they need to do to complete their mission. One person is effectively the supervisor of the heist, he’s involved but from the outside and essentially guiding the players to their destinations and making sure that no one goes off mission. He advises them with what it is they should be doing and how they should be doing it, making him a bit more like the coach of the metaphorical basketball team. There’s no one doing anything particularly stupid because they’re functioning as a team and relying on each other’s skill sets to complete the varying parts that they play in the overall scheme of things.

On the “good guys” side of things, there’s a scene with a gang unit doing a raid on an apartment complex. The cops are being shot at and instead of running amok and firing bullets in every which direction whilst pursuing their suspect, you go through the process of them clearing the rooms in a controlled and very smart manner. One person running point with a riot shield and assigning his cover behind him the specific sections that need to be checked for threats. No one was running off to be the hero, they all worked as a team to cover each other’s backs, very literally. I don’t know on a personal level if how the procedures presented in the film are actual procedures for that sort of thing, but it felt very smart, like the writer (Matt Cook) thoroughly researched (or was even a part of) a police force. 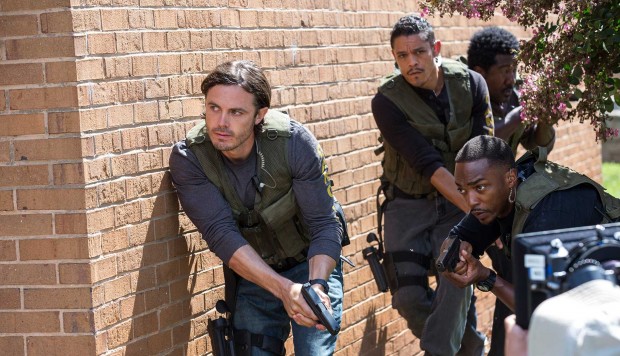 Triple 9 doesn’t talk down to you. It assumes that as an intelligent audience, you’ll understand that police operate a certain way for each individual scenario and it makes you feel like what you’re being shown is 100% the real and proper way. The characters aren’t given a ton of backstory with the main focus of the film being on the overall drive forward from Point A to Point B, but it works. There is still enough there to have emotional investment in the characters and to understand what’s at stake for them.

Kate Winslet does a fantastic job as the villain in the film, as a female mob boss who is ruthless and does everything in her power to get what she wants. Anthony Mackie and Casey Affleck do a great job in their respective roles, but the real standout performances in the film came from Chiwetel Ejiofor, whose character is the most invested in everything going on in the film, as well as Clifton Collins Jr.

Verdict:
Go see it! Triple 9 is definitely worth the price of admission to head to the theater for a night out. It’s action-packed from start to finish and with a cast containing Kate Winslet, Casey Affleck, Norman Reedus, Anthony Mackie, Teresa Palmer, Gal Gadot, Aaron Paul (basically reprising his role as rock bottom Jesse Pinkman), Chiwetel Ejiofor, Clifton Collins Jr., and Woody Harrelson how could you possibly go wrong? Some of the cast members are sorely underused but all-in-all, it’s a great flick to get you through til the summer blockbusters start rolling in.

Also, John Hillcoat, director of the film, is the man behind films such as Lawless as well as The Road, so you know that he knows what he’s doing.

Don’t miss Triple 9! And don’t miss my interview with Anthony Mackie at the Canadian premiere of the film.