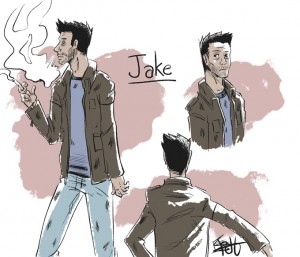 Jack has had a rough couple of years.  He is in a dead job as a customer service rep, his attempts to become a writer have been unsuccessful, and he lost his wife and child to a car accident a few years back.  This is all compounded by his inability to fulfill his dream: doing something meaningful to help people.  His spiraling, unsuccessful life is all getting to be a little too much for him and he decides it is time to give up by taking a trip to his nearest subway platform.  After being unable to throw himself in front of the train, he finds himself jumping onto the tracks to save a baby whose stroller has fallen off the platform.  In an ironic twist of fate, Jack is unable to get off the tracks before he becomes intimately familiar with the front of the next subway train.  Almost instantaneously, Jack wakes up in a world which seems both familiar and completely different.  Here we start Alter Life.

Almost everyone has some belief about what happens to us when we die.  Alter Life’s creator, Caleb Thusat, takes an interesting spin on the concept mixing religion with a little Sliders like science fiction.  So what is Alter Life?

“Imagine, if you will, that all possible worlds exist and that they are just as real as the world we live in. If one’s consciousness was able (at the time of death) to suddenly escape one world, one body, and enter another, true death would only come at the moment all of those worlds cease to exist.   Alter-Life is a way to experience those other lives. Those other existences. It is a way to put a stopper in death, to extend one’s existence beyond what we know as ‘Life.’” 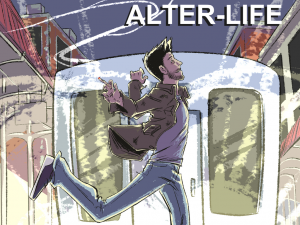 This is not a story about a loner looking to give it all up on life but rather a redemption story about a man who finally finds his purpose in life.  This “everyman” will be sent on a journey, which will deal with his past regrets while trying to figure out his future.  In the end, Jack will either become the hero he dreamed of becoming or “sink to the lowest depths of humanity.”

This Kickstarter campaign only has 20 days left and still needs your help to reach its goal.  After reading the story’s direction and some of the test pages I know this is going to be an awesome series.  Come take a look at the Alter Life Kickstarter here to help Caleb support his dream and unique vision.  You can also find out more information about the project, pledging rewards, and the author and illustrator.  It’s time to root underdog.