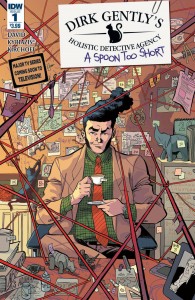 Douglas Adams was a madman. Whimsical, intelligent, supernaturally brilliant, but most importantly a madman of the highest order. Any comic attempting to follow on from his work is taking on an impossible task, yet Dirk Gently’s Holistic Detective Agency: A Spoon Too Short somehow tackles it whole hog. An absurdist detective story centred around missing voices, African tribes, and treehouse demolition, A Spoon Too Short #1 appears to have the right mix of comedy and intrigue to compel comic readers into following along. Including pages loaded with references to The Hitchhiker’s Guide to the Galaxy, Doctor Who, and the original two Dirk Gently novels, Douglas Adams’ mad spirit is alive within this work.

Dirk Gently is a holistic detective, meaning he believes in the interconnectedness of all things. Since everything is connected in subtle, unobservable ways, the obvious connections should be ignored completely. As a detective, Dirk runs in the farthest opposite direction of all leads. A great quality in a PI? Probably not, but it makes for an interesting read where you truly can’t guess the end. Writing a Dirk Gently story that is true to concept should terrify any experienced writer. Arvind Ethan David seems to get it though, describing the genius of Adams as “comedy that came not just from situational play, or even from word-play … but from the much harder to write idea-play”. It’s tough to guess whether the ideas presented here in this first issue will come together in satisfying playfulness, but so far it’s looking like if they do, the results will be in suitably unpredictable.

This storyline takes place before IDW’s previous Dirk Gently miniseries, The Interconnectedness of All Kings, and is honestly all the better for it. There’s more connective tissue between the original Dirk Gently novels and the comic this time, beginning the story in Dirk’s apartment: littered with pizza boxes and the remnants cases both finished and on-the-go. It’s a chaotic mess and the perfect visual aid to help new readers understand the character from the very beginning. Although Dirk Gently stories undoubtedly exist within a universe of science fiction and supernatural, The Interconnectedness of All Kings led on it too heavily from the beginning. The slow build in A Spoon Too Short seems to be more in keeping with the character’s traditions.

The art of Dirk Gently does a bang up job of emphasizing the comedy notes in the writing: simplifying forms whenever possible in the long shots and throwing the characters through overdramatic flailing poses in cinematic angles, not to mention capturing Dirk’s wonderfully exaggerated hair and sideburns in a way David Tennant’s Doctor could only dream of. Backgrounds are littered with details and references, particularly in Dirk’s office, and there’s some great thought put into the layout and use of panels to tell the story. The beginning of the comic opens with a Calvin and Hobbes esque scene which successfully apes Bill Watterson’s style in loving fashion. The homage is lovingly done and suits the memories of childhood in Dirk’s mind in a charmingly funny opening scene.

One aspect that struck me as a little bit jarring in this issue was an extended sequence in the middle of the comic of a nurse dressed in a revealing “sexy nurse” outfit for Halloween. It’s an Adamsian idea which might have worked better in text (drawing attention between the objectified concept and reality, as she says) but in comics, a visual medium which has been especially bad for repeatedly putting women in these situations, my instinct was to find it degrading and unnecessary. Make of it what you will. I am hoping this was an example of poor decision making about a joke and not endemic of what will be seen in future issues.

Buy It. The comic is true to Douglas Adams’ vision while giving the concept its own legs to step forward into publishing new stories. It succeeds in not being a nostalgia show and offers some promising connections for the writer to bring together at the conclusion. Writer Arvind Ethan David seems to understand the fundamentals of what makes the character work and the artwork and colours push a visual emphasis on comedy that will keep tone on the right track. Dirk Gently’s office hours are open.