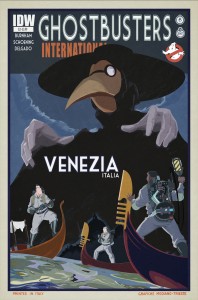 Issue two of Ghostbusters International opens right where issue one ended: Egon is out of commission due to a leg injury and Peter, Ray, and Winston, with Walter Peck, are being handed a big deal by Erland Vinter, a Scandinavian business man. When the Ghostbusters refuse, Peck and Vinter come to an alternate agreement that loans the supernatural business out for international use.

Their first stop is Italy. More specifically, Poveglia Island. Any supernatural enthusiasts will know Poveglia Island as (supposedly) one of the most haunted places on Earth. The little island in the Venetian Lagoon, off the coast of Lido, was abandoned by its citizens in the thirteen hundreds. Over the next six hundred years it was home to military bases, a plague victim dumping ground, and brutal mental hospitals. It was abandoned fully in 1968 and cordoned off to the public. The soil of the island is sticky ash from the charred remains of the bodies. The core of the island is literally human remains. Fishermen steer clear of the island to avoid human bones in their nets.

As one of the aforementioned supernatural enthusiasts, I digress. This is a Ghostbusters story after all, there’s more levity than all that. Erland Vinter sends the Ghostbusters there in hopes of clearing out the ghosts so he can buy it and open a luxury resort. With two weeks to complete their international contract, Peter considers the job more of a vacation. But when has Peter ever been right? Big things go down as the Ghostbusters arrive, guaranteeing major events in issue three.

Compared to the first issue, there’s more of a Ghostbusters vibe in issue two, with snark from Peter, skepticism from Winston, enthusiasm from Ray, brusqueness from Egon, and the general mistreatment of Janine (at least according to her). They’ve got less exposition to get through and it gets down to the action a little quicker. The inclusion of real-world haunting mythology is also an excellent choice. Whether you believe in ghosts or not it’s a compelling bit of drama to add.

Verdict
Wait and See. It’s getting better–it really, honestly is–but it could still go either way. They’ve gotten through the obligatory character introductions and have been sent out into the big, wide world to bust some foreign ghosts, but it’s not quite there yet. It’s promising to give us more, fingers crossed it delivers.