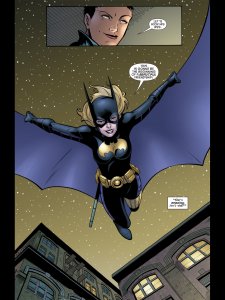 If you haven’t listened to our previous episode on Jim Starlin’s Warlock, please do. It was a ton of fun to discuss with Mara a series that neither of us were familiar with. We appreciate all of the positive feedback we‘ve received so far and hope to deliver the same in the future. That won’t be too hard to do with the next run we will be covering, and this time unfamiliarity won’t be an issue.

To read Bryan Q. Miller’s Batgirl is to love it. This book’s cult following has lasted from the series’ premier to its last issue to Stephanie’s long absence from The New 52 to today. For the casual Bat-fan, however, Stephanie Brown might be an unfamiliar and intimidating figure. While Batgirl was Stephanie’s first solo book, she had been a consistent supporting character for seventeen years before the 2009 first issue. During that time her character saw as many changes as her more popular Bat-peers. She was the daughter of supervillain (Cluemaster), a vigilante as Spoiler, in an on-again-off-again relationship with Robin (Tim Drake), the central figure of a celebrated story arch in which she struggles with teen pregnancy and adoption, a stint as one of the more controversial and debated Robins, and her very own comic book “death” and inevitable return. All of this before enrolling in Gotham University and taking on the mantle that was once held by Barbra Gordon and Cassandra Cain. 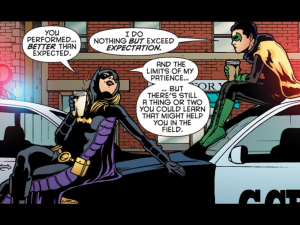 Regardless of all of this character history, this isn’t what makes the series so great. It’s a combination of Miller’s tone and infectious dialogue. While most Batman books go for large-stakes and grim atmosphere, Miller’s Batgirl takes on a personal approach and gives Gotham a well needed shot of optimism. The series shows that it is possible to take on serious topics like acceptance, family, and responsibility with a smile rather than gritted teeth, giving the reader a sense of what it might have been like to have read a relatable hero in Peter Parker in those early Ditko and Lee Amazing Spider-Man issues. To paraphrase Stephanie, she fights for hope, not revenge.

Many readers have personal connections to this series. To speak for Mara, my co-host (and wife), Miller’s Stephanie was a character she could read while in college herself. A young woman diving deep into a fascination with comic books at a time, not long ago, where the shelves were grossly saturated with masculine-centric books. In those seven years, major publishers have increasingly started embracing characters in the spirit of Miller’s series: from Hellcat, Faith, Ms. Marvel and Captain Marvel to DC’s current Batgirl. When starting this podcast, this book was at the front of the list of what we consider a legendary run.

I hope you listen as we discuss Miller’s Batgirl on Friday. Once again, I want to thank you for following along with us so far. I’m happy to present the next three five runs we will be tackling in the weeks to come. Until then: happy reading, and enjoy your waffles (read the run, I swear that it’s relevant).