For many women, the magical girl genre encompasses so many important things we don’t get in most of pop culture: powerful women, strong friendships, and complicated love. While anime dominated most of the genre, there has always been a need for it in other medias. Zodiac Starforce has given us that and I could not be happier.

The comic starts off with one of the Starforce’s members sitting in a high school classroom. Most magical girl characters are high schoolers and Panetta made sure to keep that consistent. She is attacked by a monster. Action ensues, monsters are defeated but not without consequences. The other members of Starforce start to appear shortly after. It’s apparent that the team has history and used to fight together but not at the moment because of a past traumatic experience. The plot thickens. Me likey.

Each member is based off a Zodiac sign… obviously. The girls all fit a personality that rounds out a strong team. Kim, the Taurus, is brave. Savannah, the sign of Pisces is compassionate. Aries is the stubborn and strong willed Molly. Emma is the intelligent leader and Gemini. Not all the Zodiac signs are accounted for but Panetta has made it clear that more members will be introduced as the story goes along. The celestial being Astra gave them their powers. More details on Astra are sure to come later on.

Although they have not fought together in some time, they have a strong bond. Emma gets sick and to save her, desperate measures must be taken. The team makes new friends and enemies in the first four issues and you learn a lot more about their history and traits. It is refreshing to come into a story where the characters already have their power and a precedent has been set. Learning about their past adventures and battles makes for a nice new twist to the genre. The first volumes set the tone for what to expect in the future and an important yet not too quick history of the Zodiac Starforce. 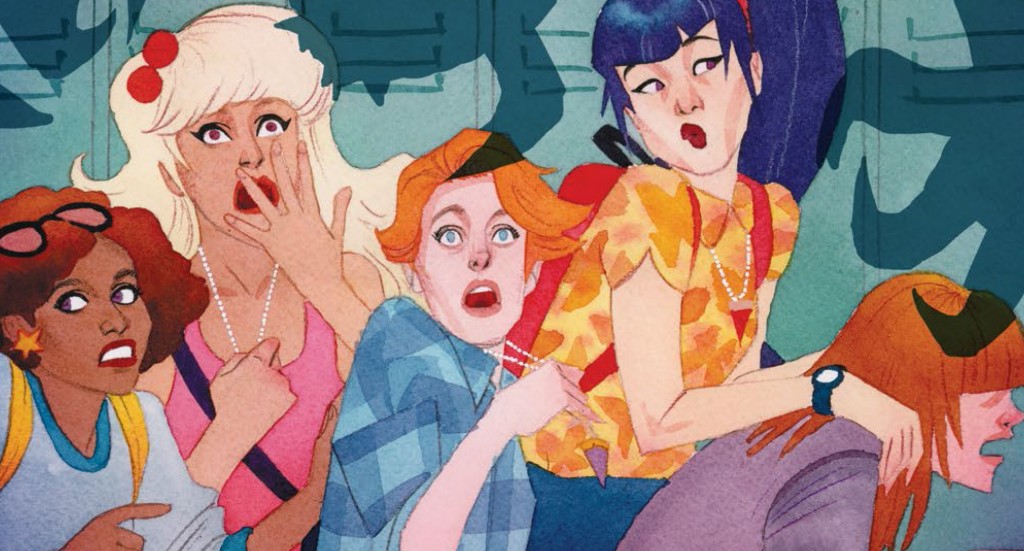 The diversity in the comic is refreshing. All the girls seem to be of a different race except for two. With new characters, I’m sure we will see even more races shown as well as different body types. Not all the characters have tiny waists with big breasts. THANK YOU! Pauline has done a great job representing lots of different women in this comic. Not to mention the costumes are battle hardy yet feminine. It’s a really nice balance because you still get that colorful, cutesy feel while knowing a person could actually fight in. Plus, they glow!

Verdict:
Buy it.  I’m in love with this comic. I already want to know the whole history of the team but am equally excited to see new members. The art is fan-freaking-tastic. Plus, the side love stories don’t make you groan with worthlessness like a certain man with a tuxedo and a mask. *cough cough* This is another great comic where sexuality isn’t solely based on heteorsexuals either. Representation matters. Have you bought it yet? I’m waiting.

By the power of Astra, Zodiac Starforce light the way!