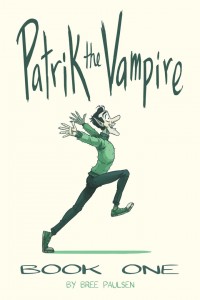 Patrik the Vampire is a super sweet guy. He likes tall iced caramel macchiatos, colourful sweaters, and Downton Abbey on his DVR when he’s had a bad day. In fact, if it wasn’t for his Transylvanian accent and tendency to creep around like Nosferatu in the shadows, you’d hardly be able to tell he spent the better part of the last millennium feasting upon human blood. Since August 2013, Bree Paulsen has been telling Patrik’s delightful story as a webcomic online. Now, after finishing the first volume of her planned three-part work, she’s bringing the project to Kickstarter so Patrik the Vampire can be published for the first time.

Patrik the Vampire is a sometimes-heartbreaking comedy webcomic. Light and silly with plenty of fluff for the most part, a quick read through of the first volume had me charmed fairly instantly and laughing out loud at many pages after that. Far from the dark, brooding vampires found in most media, Patrik really is a lovable goofball. He’s easily relatable and genuinely cares about the well-being of those around him. The comic follows Patrik’s struggle of wanting live a normal life amongst his friends while avoiding the vampiric instincts that lead him down the path towards becoming a monster. It’s an appealing premise that’s both feverishly cute (one scene involves Patrik nibbling a chew toy when his urge to bite something gets too strong) and unquestionably dark beneath the surface. 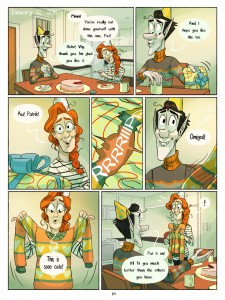 By switching back and forth between narratives set in the late 1920s and the present day, Paulsen gives us a full picture of who Patrik is and the arc his life has taken. In the past, he spends his time with Rose and Lara, an adorably fragile old woman and her granddaughter who doesn’t trust Patrik one bit. In the present, it’s Becky and Cyril, an energetic teen barista and a demon borrowed from Mikaela B’s Brain Damage. There’s darkness in Patrik in both eras that comes from trying to be a good man and knowing he’s spent hundreds of years, and hundreds of thousands of lives, being the horrible monster most people imagine vampires to be. His interactions with friends in both eras scream of a man doing his best and trying to make amends. He cares an enormous amount for the people around him, doing his best to make amends for his past behaviour and taking full ownership over his actions.

For as light as the comic feels for the most part, it also deals directly with with heavy themes and produces some oddly satisfying emotional whiplash as we flash between moments of lighthearted comedy and serious drama. Patrik is prone to spurts of severe depression at times, locking himself alone his apartment and tearing it apart in fits of self destructive madness. Becky is in a relationship with an emotionally abusive boyfriend, a plotline which is brought up regularly and comes to a head at the conclusion of the first volume. Lara doesn’t speak to her parents at all after a falling out. These are real issues, and Bree Paulsen has made a bold but effective choice in tackling such subjects head on. It grounds an otherwise silly comic with depth that makes the ongoing story genuinely worth engaging. 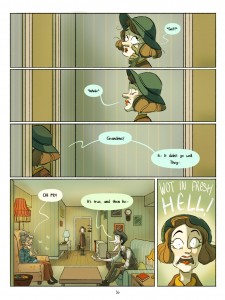 Visually, Paulson’s art for Patrik the Vampire has the aesthetics of a ‘60s Disney movie. Think 101 Dalmatians, only with a little more F.W. Murnau. The flashbacks don’t hurt that comparison by any means, showing us images like Lara fuming in her oversized flapper hat when she comes home to find Rose and Patrik sitting together for the first time. It’s all done in an endearing hand drawn style that adds an incredible amount of expression to a world inhabited by characters who frequently feel the need for overdramatic flailing. Faces move with a full range of emotions, whether it’s a mouth growing wide with a smile or tears welling up in their eyes like waterfalls in a lively cartoon.

Of course, Patrik is a vampire. It’s stated consistently within the comic that, yes, he needs fresh blood. So there are occasional scenes of gore making their way into the comic at times (specifically when Patrik is feeding or haunted by the ghosts of his past) but it’s never too much to take in within the context and feels tonally consistent with the work. If this is something you are uncomfortable with as a reader, Paulsen is careful to always post trigger warnings about upcoming pages on the site that may include unpleasant imagery.

This Kickstarter aims to print the first volume of Patrik the Vampire into a 6×9 perfect bound full colour softcover book of about 210 pages. Backers can pledge $10 for a digital copy, or $25 for to get their hands on the book itself. Other rewards can include either postcards or 9×12 prints of Patrik-related art contributed by Rebekah Duke, Natalie Hall, Claire Hummel, and Jessica Mahon.

Patrik the Vampire is a super fun read that offers a mostly lighter take on the vampire mythos. Toning down the ‘rules’ of vampirism just enough for Patrik to lead a normal life while still having unique hardships gives Paulsen a lot of room to explore the character in a fun and friendly atmosphere. Like a Disney adaptation of a vampire novel with a Don Bluth core, there are dark themes kicking underneath the surface that will make your heart burst before you feel like it’s been torn out from inside of you. The Kickstarter ends on February 29th with only about a week to go. It currently has not made its $5000 goal and may not without help, so I urge you to at least check out the webcomic to see if you have the taste for blood in your tea. I promise it still has more than enough spoonfuls of sugar.