There’s an age old question that goes “Does art imitate life, or is life imitated by art?” The question has yet to be answered but sometimes, the satisfaction is not in the destination, but in the journey. In this particular journey of “art imitating life” comes a Graphic Novel in the form of a Kickstarter project called Black. 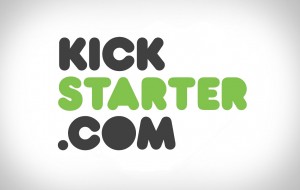 Now, back to Black. The Graphic Novel is 120 pages long, and comprised of 6 chapters. Created and written by Kwanza Osajyefo, and co-created by Tim Smith 3, whose also a designer on the project, Black is a science fiction/action adventure that tackles a topic that’s been in the news all too much as of late. It deals with tropes that trouble us as a society today in racial profiling, strained relationships between law enforcement and our inner city communities, and prejudices, much like Marvel did years ago with the parallel between the Civil Rights Movement and the Mutant populace in their comics, only this is told from the point of view of creators who could relate to the issues a bit better due to similar backgrounds, friends who may have experienced the same situations. 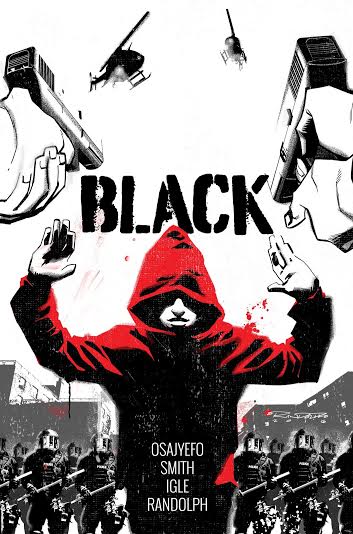 Black is the story of a world where there are super powered individuals much like any other comic book, but the catch is only African American individuals have these powers. Enter Kareem Jenkins, a young teen who is racially profiled and wrongfully accused of a crime. In an arrest attempt, Kareem is shot, and injured. Upon regaining consciousness, he runs and leads a chase with the police until a mysterious stranger intervenes and helps him escape, and here the adventure begins.

Black is a collaborative effort with other African American comic book industry professionals including Jamal Igle as an illustrator, and Khary Randolph as cover illustrator. Along with the aforementioned Tim Smith 3, and Kwanza Osajyefo. The Kickstarter project has just 12 DAYS LEFT.

Almost all of these pledge tiers include the Black Graphic Novel, but each increasing unit comes with more valuable rewards. Go to their Kickstarter page to see a more detailed description of what each tier has as a reward for supporting at each denomination. 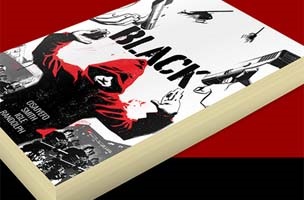 In a time where diversity is the issue on multiple fronts, let’s make sure it’s not little more than coffee shop talk of the day or talk show fodder. Black looks to be an interesting project and a great start. A start at helping to diversify the comic book industry where so many sects of our society are either overlooked, wrongfully represented or under represented. It’s a chance at hearing a story that otherwise might not be told, and gives these talented artist, writers, and creators an outlet and opportunity, that’s all you can ask for.