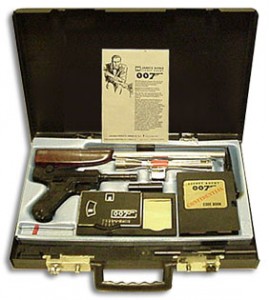 Stephanie and Bob are joined by Mike Antonucci on this special edition of Talking Comics. Mike has uncovered the secret history of a very cool toy from 1965. That toy is the James Bond Attaché Case that sold like GANGBUSTERS. The toy now sells on eBay for upwards of at least $400 and is a rare collector’s item that mega-fans are on the hunt for.

We chat with Mike about why the toy is so special and get into the man behind the toy, a man that hasn’t been publicly associated with the toy in all of this time and a man that deserves to be known for creating one of the most iconic toys in our time.

Take a listen and learn about The Secret History of the James Bond Attaché Case.

Mike is a native of New York, lifelong journalist, more than 31 years at the San Jose Mercury News in a wide variety of roles (15 years as a sportswriter, covering the NFL, Olympics, etc. and a stint writing about telecomm/Internet/Silicon Valley issues) that included a substantial stint as the pop culture writer, heavily reporting/opining on video games but also comics, toys and more. The last 7 and a half years at Stanford University, as the senior writer for Stanford magazine (goes to all alums and others) writing about faculty research (recently the ethics of DNA editing), significant alums (early eBay pioneer Jeff Skoll; another who’s a noted Wizard of Oz memorabilia collector) and the athletic programs, just to name some of the many areas that make great stories at the University.

The Comic Book Podcast is brought to you by Talking Comics (www.talkingcomicbooks.com), a blog dedicated to covering the latest and greatest in comic book releases. The editorial staff is composed of Editor-in-Chief Bobby Shortle (Fanboy Remix, Doctor Whocast), Stephanie Cooke (Misfortune Cookie), Steve Seigh (JoBlo.com contributor), and Joey Braccino who weekly dissect the releases and give you, the consumer, a simple Roman yay or nay regarding them. Our Twitter handle is @TalkingComics and you can email us at info@talkingcomicbooks.com.