The story starts late April 1945. The war is almost over in Europe as the Allies close in on Berlin. Hitler is attempting to hold the Third Reich together, but he painfully realizes Germany has lost. He decides to go into hiding and attempt to build a Fourth Reich. Enter our main characters – Major Alex Taylor and Major Conner Walsh– sent by the US and British to confirm his death. When they aren’t convinced Hitler actually died at the Fuhrer Bunker, the chase begins. 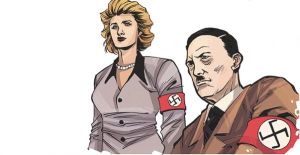 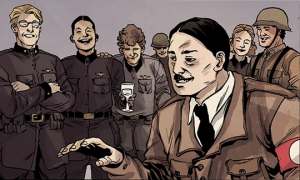 This is the world created by sixteen year old Hayley Nitz, who has a passion for comic books. It all began when Nitz learned in her American History class that Hitler’s body was never identified after the end of World War II and the fall of Nazi Germany. She began to wonder, “What if Hitler never actually died?”. Enlisting the help of her comic book writer uncle, Jai Nitz, they began to create the perfect team to help turn this idea into a comic.

Hayley and her fantastic team of writers and artists need your help to fund the comic! So far they’ve made $4,590 out of a $6,600 goal and there is 18 days left for you guys to help make it happen!

If you pledge 1$ or more, you’ll have your name printed on the back cover thank you page!

If you back 5$ or more you will also receive a PDF copy of the book!

If you back 15$ or more you will will also receive a print copy of the book!

Different reward highlights over 25$ will give you different versions of prints from the creators of the book itself!

If you love history, comics and indie creators, Chasing Hitler is the perfect comic for you! It’s so important to support indie creators and incredibly near and dear to me to help young women create the things they love. So please please please give them a look! Here is their Kickstarter site: kickstarter.com/…034181012/chasing-hitler