Fortunately for fans of King’s Road, Dark Horse has collected the chapters t 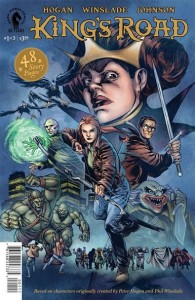 hat originally appeared in Dark Horse Presents and is now publishing new King’s Road content involving the characters and story originally created by Peter Hogan and Phil Winslade. The first issue of this three part mini-series collects both the original chapters and new content for enjoyment by both new readers and those familiar with King’s Road.

The first half of King’s Road #1 sets up the story of a royal family currently living in the suburbs, far from their home land that is filled with  magic, monsters, and mischievous witches.  News of the king’s death from such faraway realm makes its way to a present day earth.  Suddenly the prince, who shunned his royal duties, must find a way to protect his family from the dangers that are encroaching from his home world into our modern earth, while at the same time donning the crown of his fallen brother.  Hogan presents a captivating tale of urban fantasy as fellcats, trolls, and devilish giant birds invade our world attempting to extinguish what seems to be the remaining royal line. The original art of Phil Winslade is solid, although his repetitive use of the same colors comes across a little heavy handed.  That being said, his creature and otherworldly character design is top notch for a fantasy setting and is accompanied by his strong use of facial expressions and impressive, albeit brief, large battle scenes.

Staz Johnson and Douglas Sirois take up the art duties midway through the book with a fairly significant difference in art. Fortunately for readers looking forward to additional King’s Road content, the art of Johnson and Sirois only amplifies the story. Sirois coloring is perfect for the tone of the book and Johnson presents his own top notch creature and character designs as new threats immerge in the King’s Road story. Personally, I preferred the cleaner and crisper colors and art of Sirois and Johnson found in the later pages, but I certainly do not want to discredit Phil Winslade’s art, which I thoroughly enjoyed.

Hogan developed interesting groundwork in the original Dark Horse Presents chapters that I can only imagine left readers clamoring for more. Now, I also can’t wait for additional chapters in the King’s Road story. My attention was quickly grasped with appropriate pacing, strong writing, and a story set to deliver a tale of betrayal, survival, and hopefully some large scale confrontations.

Verdict:
Buy it!Peter Hogan and Phil Winslade built a solid base for an intriguing fantasy story. Staz Johnson and Douglas Sirois team up with Hogan to seamlessly pick up the reigns to build upon this tale that will surely continue to burst at the seems with enchanting magic and imaginative creatures and monsters. Definitely looking forward to the chapters yet to come.