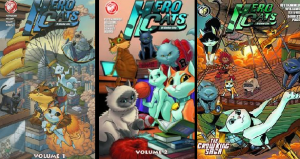 Has the world’s obsession with cats gone too far? After all, every other thing you see on the internet is something to do with cats. Well Hero Cats, a kid’s comic that follows a group of heroic cats, shows that we haven’t gone far enough!

The trade releases of Hero Cats (volume one covers issues 1–3, volume two covers issues 4–6, and The Crow King Saga covers issues 7–9) are about an elite group of cats that swoop in to save the day with their tactical knowhow and semi-supernatural skills. Issues 1–6 are one-shot based with the cats wrapping up their assorted adventures by the end of the issue. The stories include anything from basic training, bugs from outer space, a kid that thinks supervillainy is an arcade game, or heading underground into paranormal community of cave-people.

Issue 7 is where the story arc of The Crow King is introduced and where the comic really begins to hit its stride as the cats are trapped in a dream world in human form. The storyline is more concrete and less sporadic concerning how exactly the cats got from Point A to Point B. Plus it’s full of steampunky, magical goodness and humour is plentiful throughout. References to things like the ‘hang in there baby’ cat poster and self-referential jokes from the cats about chasing red dots, among a couple other tongue-in-cheek moments, are sure to garner a smile.

The art of Hero Cats is super cute, but how could it not be when your main characters are cats? It’s a simplistic style with bright colours throughout. There’s not a tonne of details, in characters or backgrounds alike, but everyone is expressive and cuddly: you don’t need many details on a cat drawing to make them cuddly after all!

The Verdict
Buy it but for the little ones. The art and premise are good but the way the stories are told leaves something to be desired for an adult comic reader. It is a children’s comic though and it’s at a good level for children that are just starting to get the hang of reading or as an out-loud story to read to your younger kids.