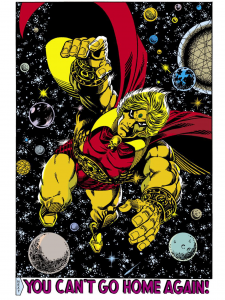 If you haven’t heard of the run that we are covering next, that isn’t too big of a surprise. Odds are that you have heard of some of the things that spun out of this series. For example, it is incredibly easy to trace one of Marvel’s more revered graphic novels, The Death of Captain Marvel, to Starlin’s Warlock Run. Another major event whose seeds were planted in the run was Infinity Gauntlet, another series by Starlin. Even the infinity gems come from this run. So does Gamora. So does a lot of the characteristics we associate with Thanos today. As a matter of fact, with the exception of Galactus and the Silver Surfer, it isn’t such a bold claim to say that this is the birth of cosmic Marvel and Starlin, shared only by maybe Jack Kirby, as its father. 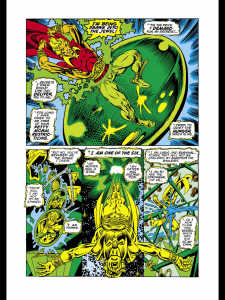 efore taking on the unpopular character in the mid-seventies, Starlin had a three issue stint on Iron Man, where he had premiered both Drax the Destroyer and Thanos, followed by a bold run on Captain Marvel. Taking advantage of Warlock’s lack of a following, Starlin decided to take the character into some uncharted territories. Where his Captain Marvel was a warrior, Warlock was going to be a messiah. To go with his ambitious story, Starlin included Christian allegory and commentary, subtle jabs at his Marvel editors and touched on issues both psychological and philosophical. If that wasn’t enough, to go along with his writing Starlin also did the cover and interior art for the issues.

As ambitious as the series was, it did not receive the reverence that it has today. Starlin’s determination and the support of a cult following saw the story move from Strange Tales to Warlock to finishing on an Avengers Annual and a Marvel Two-In-One. Patience would become the virtue to categorize Jim Starlin. While the Marvel Two-In-One is where his initial run came to an end, it isn’t where his story concluded. Nearly six years later the characters of Warlock and Thanos would show up again in the first Marvel graphic novel, The Death of Captain Marvel. 18 years later, the story would continue for both characters in Starlin and George Perez’s Infinity Gauntlet. Starlin’s contribution was a testament to how Marvel’s fans appreciate continuity and their patience when it came to long-form storytelling.

I hope you join us on Friday as we discuss this cosmic contribution to Marvel continuity and a prime example of a true legendary run.