Deadpool & the Mercs for Money #1 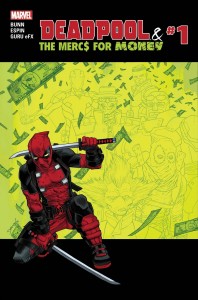 Deadpool & the Mercs for Money. A company of cold-blooded combatants. A faction of fearsome fighters. A horde of hard-nosed hatchet men. A delegation of dynamic death dealers. You get the picture. It’s a five part mini-series of Grade A badasses doing what they do best: ridiculous schemes and death galore!

Part one of five opens with Deadpool and his ragtag group of fellow mercenaries raiding Beyond Corporation’s Research Facility. They’ve been hired to grab a sealed crate by a group of unknowns that want it kept hush-hush. It all seems to go to plan until the proxies they’re supposed to deliver it to aren’t around to pick it up. Looks like whatever they’ve stolen is up for sale to the highest bidder. Shenanigans shall ensue.

Deadpool’s newest entry is an ensemble piece. An asshole version of the Avengers if you will. There’s Stingray, Terror, Greg Salinger, Slapstick, Solo, and Masacre (Spanish for Deadpool). Each character is introduced with a quick blurb and banter that shows us quickly what they’re all about. They play off of each other well as characters but having them all talk at once has the panels overcrowded with dialogue and it’s sometimes confusing as to who exactly is speaking. I imagine it would be less of a problem if some of the fattier bits of the dialogue had been cut. There are some bits that don’t flow well, seemingly left in because the joke was good. It’s issue number one though, so allowances can be made while characters are introduced and humour is established.

The art in Deadpool & the Mercs for Money is clean and colourful in its presentation. There’s action and violence and gore aplenty but it’s not detailed or used as a gross factor, it’s there as a necessity to a Deadpool storyline. It’s exaggerated but not over-exaggerated. The humour isn’t too blue (at least not yet) and the blood splatters and fight scenes presented are how I imagine a slightly more mature Bugs Bunny cartoon might be.  It’s a good stylistic choice for Deadpool’s cartoon antics.

Verdict
Buy it! Deadpool is a tricky character to suggest. He’s the exact opposite of what we see in a lot of comic books and it can be a little much for those hesitant to dive headfirst into the merc with a mouth’s world. Deadpool & the Mercs for Money is different though. It’s the beginning of what’s sure to be a fun mini-series and doesn’t require any previous knowledge or frantic research of the Deadpool brand to jump right into it. The humour isn’t as off-colour as some Deadpool media has been before and the story is sure to go to ridiculously hilarious heights before it concludes.