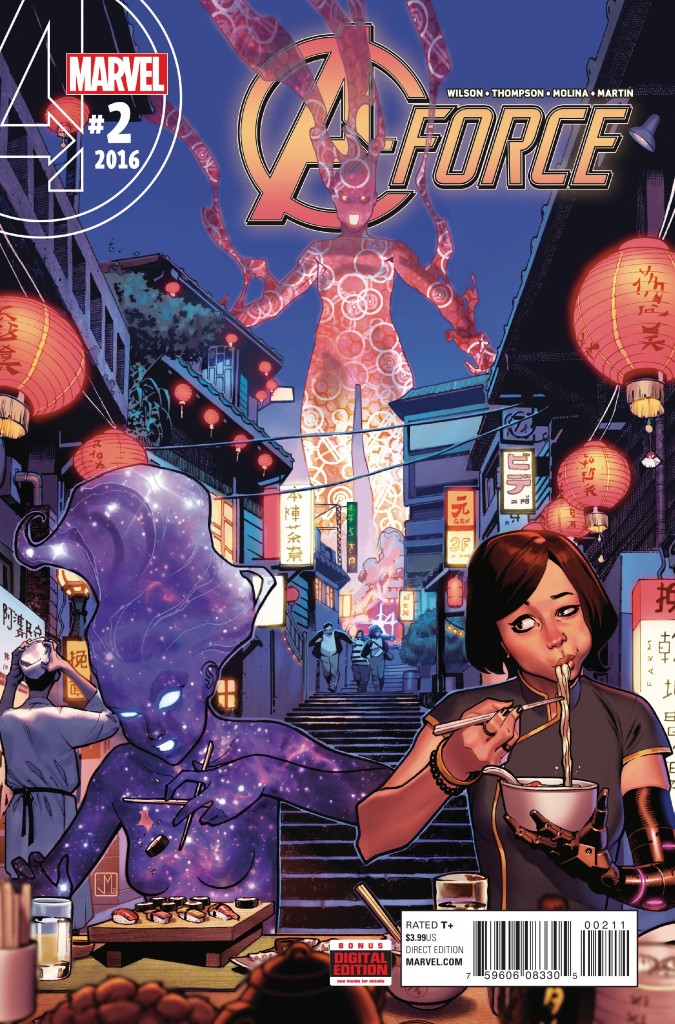 This month brings the 2nd chapter in the adventures of A-FORCE and their attempt to become a group again after the happenings of MARVEL’S latest Universe spanning, all changing, event where Medusa, She Hulk, Singularity, Captain Marvel, Nico Minoru, and Dazzler were already a team and were the protectors of the island paradise known as ARCADIA. Things have gone back to normal and it seems the only character to remember any of this is Singularity.  This issue finds her continuing to pull a Jake & Elroy, and attempting to “put the band back together.”

This issue is what I’d call a “set mover,” as it takes a set piece of a larger story and moves it along to get to the next part in the arc. Often times this can be done where it comes off as slow and prodding, but in capable hands, it can be just as exiting as the big action pieces. Kelly Thompson and G. Willow Wilson keep the scenes fresh with witty banter between the characters as they take on the “big bad” of this issue in Anti Matter. It’s always fun when you the reader know more than the characters in the story, in this case, that they were a team already, and watching the process of them getting back to that point. With six females on the team, there’s a lot of estrogen floating around, yet this doesn’t feel like “a book for girls,” Thompson and Wilson write a good story that doesn’t cater to a gender, but to fans of these characters.

The artwork done by Jorge Molina fits the book well, the first noticeable thing would be the look of the females, they don’t look like a bunch of Playboy Bunnies running around, the perspective shots are nice and the panels are filled with good detail.  What really makes this issue look good is the contrast of colors. This issue takes place predominately in space and at night, the color of the Anti Matter and Singularity really pop against the darker backgrounds. And with characters like She Hulk and Medusa, the book promises to be colorful at the least. The art, colors, and lettering all work and are done well to form a solid comic.

VERDICT
Buy It.
As the saying goes, “once is a coincidence, twice is a pattern, three times is a habit“. . . if you bought the first issue, this is definitely a purchase, one issue is hardly enough to tell if a new title will sink or swim. I go by the 3 to 5 issues as that’s at least one arc. Long enough to give a book time to hit it’s stride(especially a brand new title). Great characters, capable writing, nice artwork all blend together for a solid purchase here.