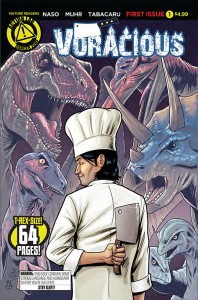 As the front cover says: “This issue contains some strong language and a dinosaur on fire! You’re welcome.” and boy are we welcome, I’m so welcome right now. Have you ever thought about what a dinosaur tastes like? I haven’t, but you should thank whatever deity you prefer that some weirdo out there did the thinking for us. Behold! Action Labs latest new series from their Danger Zone division that isn’t about lusty busty zombie girls — and here we thought that’s all they were capable of, thankfully we were so clearly wrong. Voracious finally answers the age old question posed by Laura Numeroff “If you give a chef a time machine, what will they do?”. Well, if you give a chef a time machine, they’ll probably open a restaurant that serves the finest in dino dishes.

Voracious opens with our main character Nate Willner watching everything he knows and loves burn to ashes in a tragic blaze, but we don’t have any investment in any of that yet so it’s probably fine. Flash forward almost a year and things are already starting to look up for Nate, I mean he’s working in a dead-end line cook job in some podunk town in Utah, but we can all agree post tragedy Nate is way more attractive and snarky. See kids, if comic books have taught us anything it’s that watching your loved ones die makes you hot and gives you a repartee to outwit the best of them. Despite receiving all the perks of tragedy Nate is still pretty upset about losing his sweet apprenticeship, his sister, and kinda losing his hot girlfriend to one measly fire (I guess he has feelings or something), but you know what they say; “when god burns down a door, he opens a sweet sci-fi inspired window”. Nate, while working at the diner, receives a phone call from a lawyer telling him he’s just inherited his great uncle Tony’s estate and fortune to do with as he pleases. Confused by the sudden and unexpected gift from a man he met once, he does what any sane person does; he consults his wise Native American grandmother.

While simultaneously oozing cool and doling out words of wisdom nanna Maribel agrees to the pact of “no shivving grandsons” and sets Nate on the right path. So Nate sets off to his uncle’s estate, and is greeted by the most future place you’ve ever seen. One of those weird circle portal doors? Check. Looks bigger on the inside? Check. Winding staircase into mysterious dimly lit basement laboratory? Check. When Nate ventures in he’s greeted by a prerecorded video of his great uncle (classic) where he explains his reclusive inventor/time lord status and gives our hero the chance to shape his future. If you give a chef a time machine, what will he do? To find out you may want to pick up the T-Rex sized first issue of Voracious to follow the adventures of Nate and his sassy asshole robo suit.

Naso gives a strong showing in his debut comic with a writing style that is consistently both comedic and conversational. The dialogue flows well and feels natural between characters which is something that is sometimes hard to achieve with new writers, but Naso pulls it off, almost like he’s a human being that talks to other human beings in real life. Markisan uses this super sized first issue to flex his one liner muscles, his jokes are consistent and funny throughout the 64 pages, but it occasionally felt like it was too much. The characters, aside from all having the wit of Peter Parker, were sometimes a bit more manic pixie dream person-ish than I’d like (I’m looking at you grandma who stabs things and girl who says “kicksplosion” and “meatnomenon”). This makes for a read that will occasionally make you throw your hands up in frustration, and can hurt immersion. Aside from the occasional line that will make you give the Jim Halpert look to the camera, the pacing is done remarkably well. Your attention is firmly held to the pages for what is basically three issues in a row.

Jason Muhr the triple threat artist and second half of the dynamic new creative duo for Voracious brings the ruckus with colorist Andrei Tabacaru for a vibrant first issue. Muhr’s art in this book reminds me a lot of Alex & Ada’s art, it’s realistic and well done, but it feels a bit stiff and devoid of a personal style. The expressions and actions of the characters feel stagnate, there isn’t a whole lot of motion to them. Yes, yes I know, comics don’t move, but you get my meaning. It felt like the characters were cut out and placed together on a scene instead of naturally being apart of it. The scenes in the past however felt far more dynamic, especially when it came to the dinosaurs. This also gave Tabacaru’s color palette a place to shine, the whole comic is bright and well colored but those dinos man, I loved the color choices for those dinos. I’d travel to a prehistoric past designed by these guys anyday.

Verdict:
Buy! This is a really fun book that this review unfortunately doesn’t give enough credit to. This is brand new team with their first published book so there is always going to be room for improvement, but as first issues go this is a good one. Voracious is a comic book written by comic readers for comic readers and offers peak enjoyment levels for anyone willing to throw themselves into the story. It will be interesting to see this team grow and refine their personal styles as time goes on. This book has me excited, and it’s clear the publisher and team are equally excited. This is one of those books to take a chance on. For the comic buyer on a budget this comic offers 64 pages of add free enjoyment (which I particularly appreciate), and for everyone else it’s a 3 issue start to a potential new favorite series.