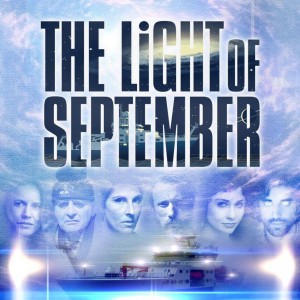 The Light of September is an original science fiction audio series from Radio Static, the production team behind 2013’s incredible Minister of Chance. The story follows the crew of an oceanographic research vessel dealing with the consequences of man’s first ventures into faster than light travel. With incredible talent attached to the project and a crowdfunding effort underway to ensure Radio Static will be able to reach their intended 10 episode goal, these first episodes are crucial as to whether this independent production gets off the ground.

The pace of this first episode is slow. Other than a few throwaway references to “the light-speed thingy” coming up soon, the science fiction element of the story is nearly entirely absent until the final moments, where even then it’s little more than a tease. We are introduced to the crew through the eyes of May, a research student coming aboard the research ship Venus for the first time. We catch a glimpse of nautical life, including a tour of the ship and a cringingly accurate example of a video anybody familiar with the words “mandatory safety training” will be familiar with. Never before have the words “man overboard” been spoken with so little conviction that I actually laughed out loud at the spot-on recreation of corporate culture.

The cast is fantastic. If you had any doubt about this one, you didn’t see the list. The Light of September is filled with big names for genre fans including Tamsin Greig, Sylvester McCoy, and Robert Picardo. If you think I’m above pointing out two of those actors are best known for playing characters named The Doctor in different sci-fi franchises, you overestimate me greatly. Sylvester McCoy is joyous as an epically foul-mouthed and mildly racist scientist. Hearing the Seventh Doctor swear and repeatedly yell “piss off” in more than every other line is something I didn’t know I needed so desperately. Importantly for an audio series, characters are distinctive in their dialogue and can be recognized easily by ear. High quality acting talent is clearly a priority for Radio Static and it shows in the final production.

Music and sound effects are also supremely well crafted. The highest compliment that I can give the sound work is that for the most part I didn’t notice it, simply getting lost in the waves or clatter of equipment as the story unfolded. It is clear that this is a team with experience who know what they’re doing and the mix is absolutely professional. When I tried to listen to this on my commute, I found it a little difficult to follow due to the lowness of overall volume, even with headphones cranked up, however I didn’t have this problem when I later listened at home, so I’ll chalk it up to some exceptionally busy streets.

Now for the elephant in the room. At only 12 minutes in length, Episode 1 was significantly shorter than I expected it would be. Minister of Chance episodes averaged around 40 minutes each, which was the basis of my expectations here. As a free podcast, it’s their prerogative to choose their own episode length and format, but so far the length was a significant factor in making it difficult for me to fully explore the world and left me feeling like there wasn’t enough meat in this episode to hook me onto the series as a whole.

VERDICT: Wait and See. Is it worth getting into this series based on the strength of its first episode alone? Possibly. These are clearly skilled creators who, for the moment, have enough of my goodwill to let a leisurely paced first episode slide. If further episodes either find a way to pack more into the short episode length, or increase the length of episodes in general, I’ll feel more confident about giving them my continued support. More prologue than pilot, consider this a teaser for what’s to come. It’ll be free to download, so you really don’t have that much to lose.

The Light of September will release on Thursday, Feb 4 2016 on iTunes or directly from Radio Static