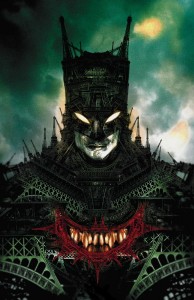 In 2004, DC announced a miniseries called ‘Batman: Europa’, drawn by comic god/artist Jim Lee. 11 years later, it has arrived. The question is: was it worth the wait?

The plot is fascinating. It’s also quite simple. Batman has been infected with something called the ‘Colossus’ virus. He has only seven days to live, with the deadly disease destroying his body as he hunts for a cure. With only one clue (Berlin) Batman sets out across the Atlantic. When he arrives, he is met by none other than The Joker. Turns out, Batman isn’t the only victim of ‘Colossus’. Driven by their shared survival, the two enemies are forced to work together to find a cure and punish whoever infected them.

From a brutal battle with Killer Croc to a showdown with a mystery villain, the Caped Crusader and his new sidekick tear across Europe. We see the dazzling Brandenburg Gate in Berlin. The fiery Karl’s Bridge in Prague. And, under a dark horizon, the majesty of Rome. The best part about the series is the treasure trove of European history and design. Seeing Batman outside Gotham is fascinating on it’s own.

For pure novelty, ‘Europa’ delivers. Seeing The Dark Knight battle his enemies side by side with The Joker is a real hoot. Two different styles of combat fill the panels. The two characters rely on each other, while never fully trusting each other. For the most part, the relationship works. While Batman teaming up with The Joker is initially hard to believe, the ‘Europa’ team does a great job of selling it.

The action is solid and exciting. Over four issues, we get varying art styles. From the classic and painterly (Jim Lee and Gerald Parel) to the downright gaudy and confusing (Diego Latorre). When we globe trot to a different locale, a new artist gives us a fresh take on the famous places Europe has to offer. In the end, after the mysteries have been revealed and the finale hurries to a close, it’s hard not to feel a little let down. The story at play feels like a dry skeleton that exists only to see two long time enemies battling together in a new way. Any characters that are introduced in the adventure (young hacker Nina), are never fleshed out in any meaningful way, and any themes the series tries to convey are watered down and tacked on.

Worth a look. Though the story feels weak and unsatisfying, we are treated to a varied adventure with a lot of great action and a surprise villain. Watching Joker and Batman argue while they battle never stops being fun. It’s a short miniseries and a classical Batman adventure. Take a gander.