Last week we started the Top 10 Star Wars “Legends” novels and series, and this week we finish it up the remaining top 5 titles. If you missed part 1, you can click here to go back and check out the list and get a little background into what a “Legends” title is. I’ll still be telling you about each story and what makes it stand out to get on the list. 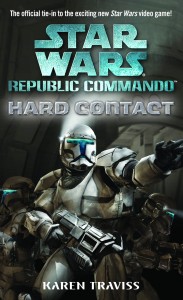 The Republic Commando series is a spin-off from the video game of the same name. Characters from the game are featured throughout the series, but the series’ main focus is Omega Squad. Omega Squad is composed of commandos that lost the rest of their team in battle. The team is sent on various covert and overt missions during the clone wars, where they fight alongside their Jedi liaisons and training sergeants (Mandolorian friends of Jango Fett).

The relationships between the team members, the Jedi assigned to them, and the Mandolorian sergeants that trained the commandos is what ties this whole series together. At its core the Republic Commando series is a story of a family and their struggle to keep their family together during times of war. The series also delved deep into how each clone was their own person, with their own wants, desires, and outlooks on life. This series is heavily character driven, and it is why it is one of my favorites. The series also features characters not found on the movie screen and adds depth to the Star Wars universe as a whole.

The only disappointing thing about this series was that the last book was cancelled. Karen Traviss left over creator differences with Lucasfilm as they had started changing Mandolorian lore in the Clone Wars television and disregarding everything she had established. I feel the Mandolorian culture she presented in the series is far more interesting than the one presented in the television series, and there was room for Filoni (director of the Clone Wars) to tell the stories they wanted. If you can look past some of these inconsistencies or disregard the show while you read, then the series is a must read. Despite the final book never being released, Traviss laid out her plan for the characters on her website, and can also be found at Wookiepedia. At the end of the day though, this series some of the best character stories in the expanded universe.

4. I, Jedi by Michael A. Stackpole 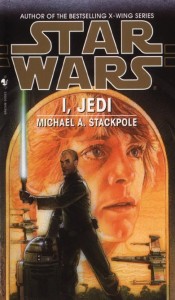 The story is the only in the Legends expanded universe to be told from the first person perspective. The story features fighter pilot and former Corellian Security officer Corran Horn (you could call him the break out star of the X-Wing series). The novel opens with Horn discovering his wife has been kidnapped. He ends up joining Luke Skywalker’s Jedi Academy before undertaking the journey to find his wife.

Obviously, this being the only first person novel makes this story stand out. It is also another heavy character focused story. Corran Horn goes on to play big roles throughout the expanded universe. His journey as he explores his abilities in the force, coupled with his skills as a former detective create a fun romp as we further explore a character that was already well established in the X-Wing series. Stackpole is a character writer, and he does it well. The story is contained in one book, so if you do not have time for a full series, pick this one up! I read this before reading any other story feature Corran Horn, and I fell head over heels for the character. One of my favorites in the expanded universe.

3. The New Jedi Order series, most notably Vector Prime by R.A. Salvatore, Star by Star by Troy Denning, and The Unifying Force by James Luceno. 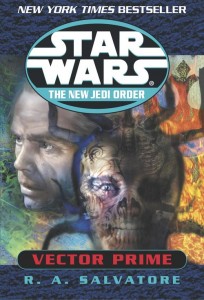 A threat from beyond the galaxy, the Yuuzhan Vong, are invading and taking over star system after star system. The galaxy, including the Imperial Remnant and the New Republic, are forced to set aside their difference to combat this threat. The Vong are a warrior race that have no presence in the force and give the Jedi an absolute run for their money. They find technology and machines to be abominations and rely or genetic manipulation and splicing to create their ships and weapons. The Jedi are stretched to their absolute limits against the Vong, and everything they know is put the test.

The New Jedi Order series was not without criticism. A lot of that criticism was against the villains of the series. The war with the Yuuzhan Vong destroyed many worlds and characters we had gotten to know over the course of the expanded universe’s life. In the premiere title Vector Prime we saw the first death of one of the main characters of the Star Wars films. This shook up the status quo and challenged other characters to grow and find out who they were.

The series was also the first done after Del Rey took over publishing from Bantam. There was a more organized approach as to how the novels were planned and written. An overall concept and story was developed and then individual authors were assigned different titles to write. The main plot was always moving forward, but each book focused on different areas of the galaxy and gave the spotlight to different characters. The series had a multi-year story that felt grander than anything else that had been done before in the Star Wars expanded universe. Future series would follow a similar setup, but with few authors, which may have kept those stories a little tighter.

The series was released with a hard cover once a year and paperbacks in between. The hard cover titles served as anchor points and focused on the big decisive battles of the series. The paperbacks fleshed the story out and helped to develop the characters over the course of the year. The interesting thing I like about the series as each hardcover title was released roughly a year apart, and the in universe timeline had also progressed about one year as well. If you read the books while they were being released, you really got a sense of the time that passed between the events as you were experiencing it at the same time as the characters.

Star by Star is one of my favorites of the series and shows off some incredible heroics by the young Jedi knights. The final book, The Unifying Force, is another favorite. In particular I love the epilogue. Many characters from the films and expanded universe are gathered, and reminisce about past adventures. It was one of those moments I couldn’t help from smiling, because I had been along and gotten to know those characters for many years.

2. The X-Wing series by Michael A. Stackpole and Aaron Allston 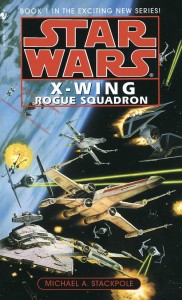 The X-Wing series follows a squadron of pilots around on their adventures as they dogfight and infiltrate enemy installations. Stackpole’s books follow the Wedge Antilles led Rogue Squadron and introduce the character of Corran Horn. The Rogue Squadron books are set between the Return of the Jedi and the fall of Imperial Coruscant. Allston’s book revolve around Wraith Squadron. The Squadron is led by Wedge Antilles and is a unit of misfits brought together to tackle more covert operations.

The series showed that you did not need Luke, Leia, Han, or Chewbacca to carry a Star Wars title. The engaging stories and, more importantly, characters are what made the series such a success. Stackpole and Allston are character writers. They get you involved and interested in the characters. Relationships develop over the course of the series and the characters grow with each other. The series encompassed everything that is Star Wars, but did it with all new faces. The characters in this series became some of my favorite in the franchise. With the end of the Legends universe, it was the loss of these characters that really stung. However, the idea and basis for the X-Wing series has me doubly excited for this years’ Rogue One film.

1. Heir to the Empire by Timothy Zahn 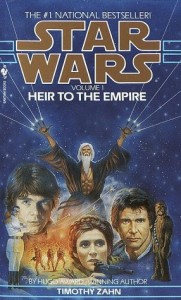 From the back cover:

“It’s five years after Return of the Jedi: the Rebel Alliance has destroyed the Death Star, defeated Darth Vader and the Emperor, and driven the remnants of the old Imperial Starfleet to a distant corner of the galaxy. Princess Leia and Han Solo are married and expecting Jedi twins. And Luke Skywalker has become the first in a long-awaited line of Jedi Knights.

But thousands of light-years away, the last of the Emperor’s warlords has taken command of the shattered Imperial fleet, readied it for war, and pointed it at the fragile heart of the new Republic. For this dark warrior has made two vital discoveries that could destroy everything the courageous men and women of the Rebel Alliance fought so hard to build. The explosive confrontation that results is a towering epic of action, invention, mystery, and spectacle on a galactic scale-in short, a story worthy of the name Star Wars.”

While not the first novel to be written outside of the films, Zahn’s Heir to the Empire kicked off resurgence in Star Wars novels, comics, and merchandising. Heir to the Empire was the first in a trilogy of novels. The stories were grand, the threats were real, and our characters were facing new challenges. This novel is the spark that catapulted hundreds of comics and novels into the expanded universe. Even after all of those other releases though, it still stands the test of time as one of the best Star Wars novels and series to be written.

Before the prequels were ever announced and even after the prequels were released, Heir to the Empire represented to many fans what an Episode 7 could have looked like. Many were hoping that the series would be turned into a film after Disney’s announced it would be making new Star Wars films. Disney went a different course, but that still does not discount the significance and influence Zahn’s work has had on the Star Wars universe. The capitol world Coruscant gets its name from this series. The books and name were so popular and ingrained in the minds of fans that Lucas decided to use it in his the prequel trilogy.

If you had to choose one novel to start your journey into the Legends expanded universe, then without a doubt Heir to the Empire is where you should start.

Do you have a favorite novel or series not listed here? Let us know in the comments below!