I was twenty years old party when a girl with green eyes and a ring through her nose handed me a beat up trade paperback that collected Preacher issues 1-6, and that was it. I was in love.

With the comics, not the girl.

I didn’t know comics like this existed. I, of course, knew of superheroes, of Archie, and Simpsons comics, and the like that lined the shelves of checkout lanes at grocery stores. But this, this was different. This was art to me. The characters were flawed and varied with deep rich back stories and futures I needed to know. I loved it as strongly as any of the books by my favorite authors which I held sacred.

Since then I’ve read hundreds, probably thousands, of comics, and still when asked I always mention Preacher as one of my favorites. It wasn’t until last week, when I was thinking about the upcoming Preacher show coming out on AMC that I realized I hadn’t actually even flipped through the pages of the comics that have been sitting on my shelf since I last put them there some 6 years ago. So last week I reread the first volume of Preacher once again to see how it held up, and to get myself excited for soon-to-premier show.

If you’re not familiar with the (very) basic premise is this. Heaven and Hell exist though the delineations of “Good” and “Evil” aren’t so black and white. The fact remains, though, the two never mix. Until they finally do. A Seraphim (one of the highest order of angels) and one of Hell’s demons screwed 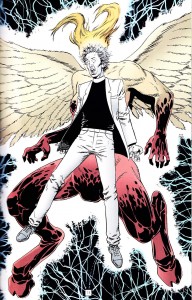 each other’s brains out and conceived a child. This child (which for some reason which maybe made sense in the mid-1990’s looks like a comet with a crying baby’s face on it) represents a new paradigm, a new set of ideas, where good and evil can mix and be swapped for one another, and there is nothing quite so powerful as a new idea. For what is a new, challenging idea in the face of old dogmatic? So the old guard of Heaven has this hybrid child, named Genesis, locked away. Until the day it escapes and makes its way to Earth in hopes of finding a corporeal form to inhabit. For reasons that aren’t immediately apparent, Genesis chooses Jessie Custer, a preacher in a small town in Texas who has lost his faith in religion, his fellow man, and definitely himself. When Genesis merges with the body of the preacher, it imbues him with The Voice – the word of god, which he can use to command anyone to do whatever he says. As he comes to learn about his new powers, he is joined by his ex-girlfriend he abandoned back in Phoenix for reasons that are yet to be revealed, and an Irish bloke named Cassidy who has quite the interesting backstory himself. After a handful of run-ins with a cavalcade of questionably ethical cops and an undead gun-slinging bounty hunter dubbed The Saint of Killers, the trio discovers a dark secret that Heaven is hiding: God has abdicated his throne and his responsibility, and the world just may come crashing down around them at any moment.

It’s a hell of a story (no pun intended), and one that will likely get you hooked from the start if you choose to pick up the comic, if you decide to do so, but there is just one glaring problem to me when it comes to a TV show, and it’s this.

We’ve seen all of this already.

Now, Preacher had been in the works, or at least the talks, to make its way to the small screen a handful of times before. Each time the project left ultimately abandoned and claimed to be “unmakeable.” Whether it be to violent or perverse or politically controversial, there seemed to be little hope for Ennis and Dillon’s cult classic to ever be adapted. Comics have always had room for stories that didn’t belong or couldn’t exist anywhere else.

But the times have changed, and unfortunately Preacher just sort of missed the boat. In the past decade or so, television has vastly broadened it’s horizons to include every and all type of story. AMC’s The Walking Dead and Breaking Bad alone show there is room for even the most challenging or gruesome stories to exist on TV even outside the confines of premium programming, and had Preacher been able to be green-lit at the onset of the content revolution we now find ourselves in then maybe, just maybe you’d be seeing the same story that Ennis penned back in 1995 receive a direct translation to television. In the intervening years, however, so many facets of Preacher that when put together made people claim it was one comic that would never be made into a TV show, have made their way to film and television in one form or another.

The protagonist of the comics, Jessie Custer, gets the capability to command anyone to do whatever he says, which while maintaining its nuanced differences, would come off incredibly similar to the powers wielded by David Tennant’s character Kilgrave who terrorized Jessica Jones in the the eponymous, wildly popular Netflix series. Not that the characters are anything alike, but I can already hear the comments of the uninitiated now.

Cassidy is a vampire (sorry, spoilers) but with a heart of… well not gold, but he’s likeable and funny. Which even in the 90’s was already getting a bit played out, but after the onslaught of vampire-laden programming from Vampire Diaries to True Blood that we were inundated with in the late 2000’s, I just balk at America’s willingness to fall in love with another bloodsucker again.

And oh, Jesse and Tulip’s relationship wreaks of Tarantino’s True Romance (which came out first), and while maybe most people who are excited for the upcoming show might not even think about the film – I couldn’t help but think about it while rereading the comic. Swap out Elvis Presley with John Wayne and they may as well be the same thing.

Now, there has only been a minimal amount of footage released so far to let us know what to expect from the upcoming series, but nothing in it really suggests we’re going to get the story from the comics. Not that this is all necessarily bad, I mean, I don’t need a conversation where our titular Preacher is confounded by the magic of the internet, or an explanation of who Kurt Cobain is. The comic is dripping with 90s nostalgia which has only concentrated in the 20 years since it’s release. And while nostalgia makes for a good buzzfeed listicle, it makes for nothing more than kitschy television that alienates viewers who don’t get the references.

On a second read Preacher still holds up as a classic comic, and I while I would love to see a great adaptation, if I was a betting man, my money is on this one being a dark gritty tale of a man set on protecting his kin with a supernatural twist. It might end up being good, even great, but it won’t be Preacher.

At least we still get Arseface.