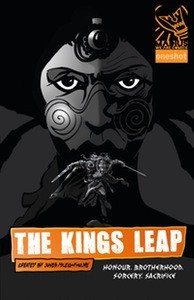 If you’re a fan of swords and sorcerers, blades and magic, brave heroes and fowl beasts,  “The Kings Leap” is the mark you should fire your arrow straight and true to hit. This one shot is filled with monsters and the men that are brave enough to fight them in large scale battles.  It’s a smooth ride on a track through the storytelling styles from the old adventure films that featured barbarians, witches, and magic like those in the 80’s Golan Globus movies.

The story is written in a way that makes you feel like you’re watching a film instead of reading a comic book. For a one shot issue, there’s a feel of depth with the characters, giving enough backstory to make the consequences matter, even using their own vocabulary in spots with asterisks to guide you to the bottom of the page where you’re told what the word means.  The story is told in two layers, one as an old Nanny sitting at a fire telling the village children a goodnight fable, the other part is showing the journey she’s narrating, flipping between the two.  It really gives the story a fairy tale feel and works well.  It also leads for a fun twist in the end.

The artwork is well done and fits the story perfectly. The artist’s use of panel placement keeps the story flowing and sets the book apart from the average comic on the shelf today. Not only are the panels placed nicely, but the scenery in each, from the depth, perception, and scene setup makes for a fun read. The attention to detail and creature design work well and come out great.

Verdict
If you’re a fan films like Conan, Krull, and The 13th Warrior, then this is a definite purchase for you! I also would recommend someone checking it out if they want something different, a good story, nice artwork, and a more cinematic like feel to your comics.