Of Stone Vol. 1-3
Story and Art by D.A. Bishop
Review by Billy Seguire 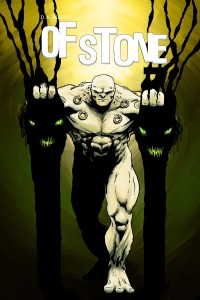 In a mythological comic, one of the biggest elements to look for is the scope of the physical world. The environment should speak to the story that is being told. Is this a place determined by the theme, shaped by the characters that inhabit it? And is this a place that will foster other stories to grow? Of Stone takes a mountain and carves from it a trial built on grief and doubt: a story of Ogres fighting shadows in the snow.

Of Stone began its life as a one-shot black & white comic released two years before the ongoing series was even planned. In the author’s own words, “one book was all I had in me. That was all I had expected to have in me as far as that story went.” Yet the story, told in an ancient and enduring style, was gripping, and as D.A. Bishop continued on with other work, the living world and concepts he had set up in that comic gradually became something that demanded to be explored in further installments.

Our main character, Gan, is an Ogre who shares character design traits with Swamp Thing and the thick masculine forms of many Frank Miller works. Like those characters, he is intimidating and unmoving against his enemies, but unlike them his strength does not define him as a being. His motivations come from pain. Pain he feels from loss and from the burden of his bond to “the people”, other Ogres of the mountain he loves and for whom he would carry any weight. Far removed from the stoic loner, it is his loyalty and relationships that brings this motivation to Gan’s story. 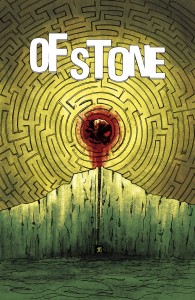 Reissuing the first story to better reflect the style of the ongoing series, this new updated version of Issue 1 adds colour that works even harder to create a juxtaposition between light and dark, and those muted greens of the shadows and light blues of the snow do their justice to highlight the barren landscape. Rock is everywhere and little vegetation is found throughout. Gan is both physically and thematically isolated from all forms of life.

The story is told nearly exclusively in this first issue through Gan’s prose narration, bringing to mind an atmosphere of the oral tradition that further entrenches the story’s mythological roots. Gan is on a hunt, one that all of “the people” take as a coming of age ceremony. Yet he, unlike the others, is undertaking this journey every cycle for reasons which can only be inferred through revelations later on. We follow him on this journey from beginning to inevitable conclusion, and the discovery made while he is alone on the mountain is one that breaks down the foundation of his understanding in a moral question that allowed a satisfying conclusion to the intended single-issue arc while still leaving room for further issues to carry on. 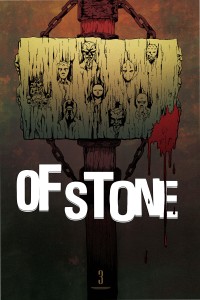 Issues 2 and 3 carry on building on that shaken foundation, using dialogue and changing character perspectives to allow the world to grow. Right off the bat, Issue 2 fascinated me with its unique take on the Minotaur as mathematician, obsessing over his labyrinth and infallible calculations. His character is backed up by an absolutely heartbreaking prose story in the third issue (written by Ben Rosenthal) that is only hinted at within the text of the comic but makes subsequent reads of both issues much more poignant. Gan’s wife is also front and centre for a portion of Issue 3. Here we explore in more detail the grief experienced within the story, and discuss the concept openly, whether dwelling on a loss is sad or loving, with a character whose appearance may continue taking the comic into interesting areas.

One large departure for the relaunch of Of Stone is that we also see more of the human side of this world’s civilization, as the ongoing comic actually gives us a view of the race of man which is, for the most part, wholly separate from the other societies we’ve seen in the comic so far and predictably at odds with the world around them. The third issue ends on a cliffhanger between these two forces, and with some well-defined human characters built up through the first two issues I’m curious as to what direction Bishop will take in the conflict.

VERDICT:
Buy It. If these first two issues of the relaunch are anything to go by, D.A. Bishop seems determined to continue expanding the world he created two years ago in the standalone version of Of Stone. If you’re interested in ancient mythologies and want to see those well-established concepts filtered through the turmoil of grief and loss, stick around. This is not only the story of a world, but of the people. Of stone.