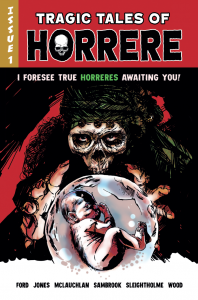 Tragic Tales of Horrere may only have one issue containing four short stories currently on the market, but it’s in line to be something I follow for as long as they publish it. Varied and textured horror anthologies are tough to come by and disappointment after disappointment has left me skeptical to the whole idea of anyone ever doing them well again. Horrere gives me hope.

There are four short narratives within Horrere: If You Go Down to the Woods Today, You Are What You Eat, Grimoire Baby Bell Jar, and my personal favourite, The Aufhocker. Each story possesses its own brand of horror, be it monsters, magic, or even what humanity might one day turn into. None are outright scary, but all are dark, demented, or, at the very least, will catch you off guard. And isn’t that what good horror is all about? A story, idea, or image that sticks with you well after you’ve finished?

An interesting touch in Horrere is that each story in the issue has the same writers but not the same artist. The same writers help with the consistency and flow of each story while different artists help each narrative stand apart from the one that preceded it. Each art style also conveys something within the story. In If You Go Down to the Woods Today the art is stark and sharp like the characters you encounter and in You Are What You Eat you get more details in the littler things around the world but it’s also a more cartoony style. The Aufhocker had my favourite art. It was varying shades of grey, sort of fuzzy with soft edges. It was full of shadows and interesting angles. It added so much more to the written words.

Verdict
Buy It. What’s been shown so far is a promising start to what’s sure to turn into a very entertaining horror anthology. Some of the narratives end a little sooner than you’d like but that’s my only real grievance with it. Grab yourself a copy at £2 (that’s about $4), turn the lights down low, and jump into some solid comic book horror.