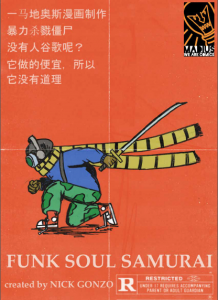 Ever since I read Rocket Raccoon #5 by Skottie Young and Batman and Robin #18 by Peter J. Tomasi and Patrick Gleason, silent comics have fascinated me. This is what compelled me to explore Funk Soul Samurai by Nick Gonzo. These stories eliminates a part of what comic books are made of. It introduces to the readers authorship instead of words. Nick Gonzo uses that concept but gives the reader cues to follow along as well as sound affects. The comic could be open to multiple interpretations with the use of imagination. Though the actual storyline is static and easily interpreted. It eases the experience and the reading.

The story follows a nameless faceless protagonist who is a skateboarder and a samurai. The name of the comic is on point. It pushed me to reread the comic with funk music and that gave me a whole new appreciation of the story. For a violent and R-Rated comic with zombies, it was surprisingly light hearted and witty. The character is creative and goal oriented making reading this comic that much more entertaining. He improvises weapons and fights for what he wants, even if what is in front of him is a not your average zombie. Funk Soul Samurai by Nick Gonzo ends with a promise for more entertaining stories to come. 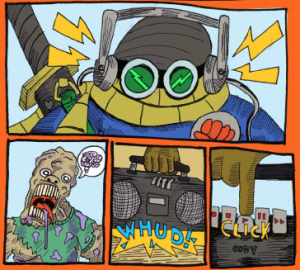 The entertainment goes beyond the story. The art in and of itself is highly entertaining. It is an assemblage of bright colours and 90’s style contrasting with many hyper modern art styles in the industry. The style gives an interesting feel to the fight scenes creating a sequence of interactions both detailed and bare. Funk Soul Samurai’s art uses the sound effects to give new life to the imagery. The story could not exist at the same interesting level if the art was infested with a written narrative. This makes the story more animated than beautiful, which is the rather the point, in my opinion. The most fun part of the story is the use of Emoji-like representations of emotions. It was a stroke of genius to give the characters a voice without voice through images.

From a graphic perspective, there were many elements used in the comic that were interesting to see. The comic had unclean lines and the panels were not arranged sequentially. This prompted the artist to add some arrows and focus circles. This method also gave the comic itself movement and stability. Now place this story, this art and this graphic on an orange background. Funk Soul Samurai by Nick Gonzo shocked me with that choice and I cannot be happier with such a funky selection!

Worth a look! Silent comics are just too fascinating for the reader to miss out on this indie comic. The story is great because the plot is simple and it shines through perfectly to be read. It is also very entertaining and interesting to see. Funk Soul Samurai’s art is distinctive, stylistic, and bright! The different elements of the imagery should not have worked. However, the graphics link them all together making it a great visual piece.

Recommendation: Read it with Funk/Soul Music!

Pick it up here!