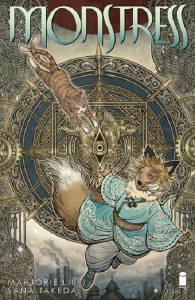 One of the best debut comics of 2015 hit the shelves again this week with Image Comic’s Monstress #3 by Marjorie Liu and Sana Takeda.  This highly intense issue immediately jumps into the action when readers finally get a detailed glimpse at the potential power of the monster dwelling within our protagonist, Maika. Monstress #3  continues to explore and build upon the rich and detailed world developed by the wonderful minds of Liu and Takeda.

The excellent storytelling doesn’t slow down for a second in this action packed and suspenseful issue that continues to contain strong characterization especially for the characters of Maika and Little Fox.  Marjorie Liu continues to masterfully craft this world and story of monsters, fantasy, and magic. Sana Takeda’s art is simply stunning. Everything from the character designs, to the costumes, the facial expressions, the action sequences, and the use of color are all beautifully detailed throughout the entire issue.  The mystical art that Takeda adds to Liu’s polished world building is fascinating and only makes this comic that much more enjoyable and unique.

As a brief aside, I would like to also mention how much I appreciate not only the succinct story summary at the beginning of the issue, but also the informative history lessons of Professor Tam Tam at the end of every issue. Both are just another component of what makes this book so great to read on a monthly basis.  The recap of previous issues is key for a comic of this weight and the Tam Tam history lessons only help detail this immense and mysterious magical world.

Verdict
Absolutely Buy It –  Simply put, Monstress is absolutely a must read comic and is one of the strongest and best comics to debut in all of 2015.  I am telling you now that Monstress will, and should be, considered one of the best books of the year with both Marjorie Liu and Sana Takeda receiving recognition for some of the best writing and art respectively.  The story of Monstress is captivating, mysterious, and thrilling and is enhanced by the outstanding and enchanting art of Sana Takeda.  This is a comic book you do not want to miss.