What started as a parody of the Johnny Quest pulp adventure cartoon trope very quickly grew into its own self mythologizing universe simultaneously paying homage to and picking apart a whole plethora of macho stereotypes and pop culture touchstones.

With the long awaited return of The Venture Bros just days away, this guide will prepare you for your adventure into the (now in glorious Extra Color) world of Team Venture.

(This guide contains mild spoilers for Seasons 1 – 5 of The Venture Bros.)

What It’s All About?

The Venture Bros is an action/adventure/comedy animated series chronicling the lives and adventures of the Venture family: well-meaning but dopey teens Hank & Dean, their unethical, insecure and under-achieving super-scientist father Rusty Venture, their bodyguard Brock Samson and the family’s self-proclaimed arch-nemesis, The Monarch.

The characters are heavily influenced and inspired by Jonny Quest, comic book superheroes and super villains, and of other famous figures from popular culture. 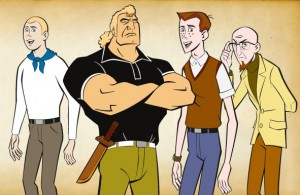 Hank & Dean Venture (Christopher McCulloch &  Michael Sinterniklaas)
The goofy and naive titular protagonists, these home-schooled hardy boys are dragged around the world on adventures but are never usually the center of of any of them.

Dr. Thaddeus ‘Rusty’ Venture (James Urbaniak)
A former boy adventurer, Rusty is a failing super scientist mainly living off the success and wealth of his famous father Dr. Jonas Venture. Constantly irked by his sons and always on the look out for a short cut to fame or wealth.

Brock Samson (Patrick Warburton)
Team Venture’s bodyguard and Swedish murder machine assigned by the GI Joe-esque Office of Secret Intelligence (OSI). The Venture family was once just his assignment but now he protects them more out of love than duty. 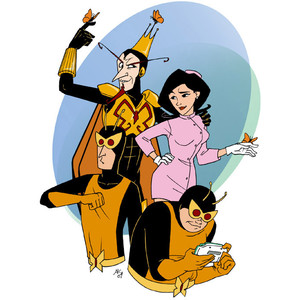 The Monarch (Christopher McCulloch)
Dr. Ventures butterfly themed arch enemy (at least in his mind) The Monarch’s passion for hate is unrivaled, although he has never and probably never really intends to go through with actually killing any of Team Venture, its the thought (or hate) that counts.

Dr. Mrs. The Monarch – Formerly Dr. Girlfriend (Doc Hammer)
Styled after Jackie Kennedy outfit and all (at least as Dr. Girlfriend) The Monarch’s number 2 is the driving force behind his whole operation. Possibly the most competent and capable character in the entire show her only “flaw” in the eyes of all but her husband is her three pack a day voice (Hammer gives her a comically deep voice)

Henchman 21 & 24 (Doc Hammer & Christopher McCulloch)
Incompetent yet loyal henchmen of The Monarch who are the only two he really remembers or cares to talk to. They stick with their boss through thick and thin. Somehow they have survived time and again (even through battles with Brock Samson) more through cowardice and luck than anything else.

Dr. Orpheus (Steven Rattazzi)
One of the more obvious parodies Dr. Orpheus (essentially Doctor Strange) rents a building on the Venture Compound with his quasi-goth daughter Triana. A necromancer by trade and known for being overly dramatic although he has proven extremely valuable to Team Venture helping them out of many a bind.

Master Billy Quizboy (Doc Hammer)
A “boy” genius (actually an adult with a small body and large head) who is a super fan of the old Rusty Venture tv show he now helps out his hero from time to time although he usually just ends up annoying him. In his own time he is a neurogeneticist and co-founder of Conjectural Technologies with Pete White (Christopher McCulloch) 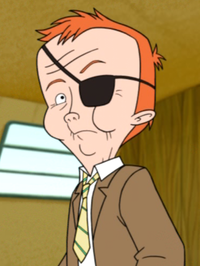 Molotov Cocktease (Mia Barron)
Brock Samson’s on again off again almost nearly lover and ex-soviet assassin. It is never clear which side she is on at any given time as she constantly changes allegiances or plots long cons. 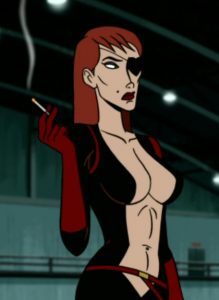 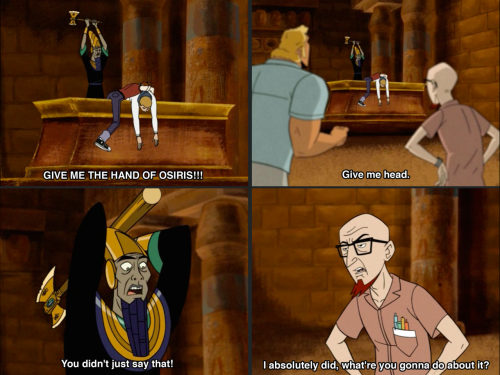 Escape to the House of Mummies Part II
A perfect example of how absurd the Venture Bros is, this episode only gives you the second part in an assumed trilogy of episodes seemingly parodying how weird things can get if you hopped into a random episode of a similar cartoon or comic book without context. There is a “previously on” and “next time on” which briefly tease at the first and last act of the story which never actually materializes.

While Hank, Dean & Brock are trapped in a convoluted time travel epic involving an Egyptian cult, Sigmund Freud and Caligula, Rusty has managed to escape and head back the the Venture Compound to look for some kind of super weapon to help. He soon gets waylaid by Dr. Orpheus and the two embark on a challenge to see who can shrink themselves the most (through science or magic) completely forgetting that his family is in mortal peril. 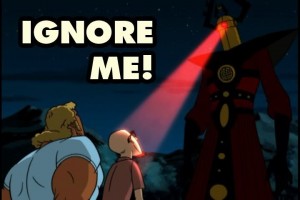 Twenty Years to Midnight
A great showing of the series mythology sees Team Venture span the globe for parts to a mystery device made by Dr. Jonas Venture that can save the world on the exact date of…Tomorrow! We get to return to Spider-Skull Island (again), read some of original Team Venture member Colonel Gentleman’s (Christopher McCulloch impersonating Sean Connery) dairy, see an adult Johnny Quest (Brendon Small) and get to see Professor Impossible’s (Stephen Colbert) comeuppance. 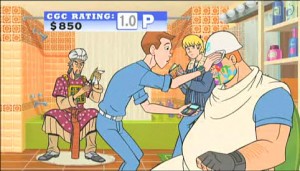 Blood of the Father, Heart of Steel
Season 4 is a real turning point in the show and the opener throws us into the deep end whether we like it or not. The entire episode is out of order and so feels nonsensical until the key to understanding it is revealed towards the end. The key being the CGC rating of one of the characters copy of Marvel Comics #1 starting mint and ending…not so.

Brock’s future with the Venture clan is uncertain after quitting his post and the OSI, a major death starts its spiraling effect on the season and Dean must kill Adolf Hitler trapped in the body of a Bulldog. There is also somewhat of a time jump as Hank and Dean have noticeable aged after their technical “immortality” is no longer in play.

Where to start your venture?

Unlike most cartoons The Venture Bros has a heavy and ever expanding mythology. However there are only around a dozen episodes a season at twenty minutes a piece, so delving into the first season is probably the course of action. If you want to dip your toes before you dive in try season one episode ten Tag Sale – You’re It! You get introduced to a whole hosts of heroes and villains all in the same place and all there for a truly mundane reason, buying junk.

Follow
20 something Londoner voraciously consuming any and all media that dares to cross my gaze.