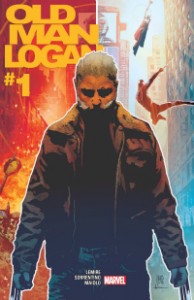 Old Man Logan is one of those books that has been on my read list for a long time now, but I’ve just never gotten around to reading, so when I heard there was going to be a re-launch of the book, I was excited to start off at issue one. Then I looked and saw that two of my favorite creators in the industry were on the book, writer Jeff Lemire and artist Andrea Sorrentino. Their run on Green Arrow may be one of my favorite Green Arrow runs of all time, so I had high expectations going into this book.

The story starts off with Logan waking up naked in the middle of Time Square in the year 2015. This is years before the Villain uprising and takeover, so Logan tries to figure out exactly what’s going on. We then flashback to the Wasteland where Logan and his son Scotty come head to head with small time thug, the Black Butcher. This interaction ends with Butcher stealing Scotty’s hat and smacking him across the face. Logan and Scotty leave as they don’t want any trouble, but you can tell that Logan is raging inside.

Flashing forward back to 2015, which is actually traveling back in time, Logan remembers the last thing that old Black Butcher did to his son, so he goes out in search of the young Butcher and finds him. Not only does Old Man Logan find the Black Butcher, but he chops off his arm and impales him right through his head. Yes, you read that right, he straight up murders Black Butcher. We are then shown a panel of Logan’s arm with the name Butcher crossed off, followed by Banner, Mysterio, and Red Skull. That’s right, Bruce Banner is next on Logan’s list. 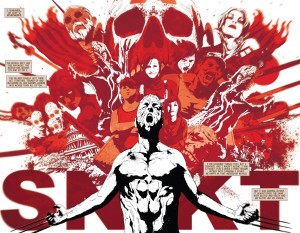 y history of Old Man Logan or this version of Wolverine, Jeff Lemire did a fantastic job of telling you what you needed to know, while still leaving you wanting more. I’ve got to say, Lemire, in my opinion, is one of the premiere writers in the entire industry right now. From his Green Arrow run, to Extraordinary X-Men and Hawkeye, to his creator owned stuff in Descender and Plutona, everything this man writes is gold, and this first issue of Old Man Logan is no different.

The art in this book is absolutely gorgeous. Sorrentino’s simple yet complex art combined with Maiolo’s colors make this book stand out from the every day, sometimes boring stuff that can come out of the big two. The raw emotion captured in just this one issue was absolutely fantastic. Every time I read a Sorrentino book, I walk away wanting more, and that’s exactly what happened with this book.

The Verdict? A must read! This book had everything I could want from a book about one of my favorite Marvel characters. It’s a side of Logan I’m not super familiar with, but it has me wanting to push the original Old Man Logan to the top of my read list. I think it says a lot about a book when it makes you want to go read original material. The creative team on this book is one of the best in the industry and this first issue of Old Man Logan was an absolute home-run! A definite 5 out of 5 and a book that will be at the top of my pull list from now on.