Hi, how are you doing today? I hope this letter finds you well. You’re probably wondering what this letter is all about, I’ve been doing some thinking about us lately. Giving our relationship some deep thought. I wanted to talk to you about a few things, but it seems like you’re very busy, so I figured I’d submit a letter to you.  I hope that you get a chance to actually read this letter, take it to heart, and try to understand where I’m coming from…I only write because our relationship matters to me, if it didn’t, I wouldn’t bother.

I’m guessing the best place to start is at the beginning. We’ve been together a long time, and most of it’s been great. We were spending so much time together at first. We met early and hit it off fast. It was so good! I used to MARVEL at the IMAGE of us together. I really thought I was a DARK HORSE when it came to winning you over, My heart used to go BOOM when I would look at you in class instead of my civics book when we were supposed to be learning about DC. 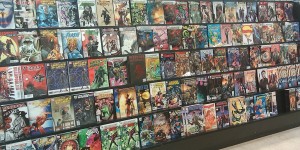 Like all couples, we had issues, they were few and far between though. Maybe 3 or 4 issues, but that was it. They would only come once, maybe twice a year. And when it came to our issues, they stayed separate, you might even call them “Mini” in a series rarely “Crossing Over” into other issues. We would have fun and it didn’t cost us an arm and a leg to do it. I used to sit back when we were together and let you tell me these stories, I loved to hear your stories. They used to occupy hours of my time. You were a great story teller, stories about LEAGUES, and JUSTICE, about AVENGING and DEFENDING. They were FANTASTIC, even AMAZING!

Time passed on and my feelings grew stronger for you. We got together sparingly at first, but then it was weekly, like every Wednesday. Then it was a couple times a week and on the weekends. But I started to notice a few things, more and more people were talking about you, wanting to be around you. It became evident to me that you were getting very popular, but i didn’t care, that was OK. You were so great I wanted to let others know just how unbelievable you were. Some of the best talent in the world got interested, everyone from WRITERS to PENCILERS, and INKERS to LETTERERS wanted to hang around you. I was glad to see how popular you’d become. Then it happened, you rally got big. You made it to Television and even Movies. You were everywhere and I loved it. I knew there would be a price to pay, a trade off in order for you to be so successful. As a result to all of this, it started to cost more for us to be together. You started to spread yourself kinda thin, and the “issues” i talked about earlier…resurfaces and started spreading, and even crossing over onto each other. So much so, that I began losing track of the original issue that started things in the first place. When I told you I was losing track of our issues, your answer was to keep “STARTING OVER” at #1 again, even though it hadn’t been that long since we started over from the last EVENT.(which was only 11 or 12 months ago)

Then there was EVENT after EVENT, which only lead to another EVENT, soon our whole relationship was one event making way to another, I began to miss the smaller issues we used to have. I got confused, often missing some of your stories, which led me on goose chases trying to piece together things so I could understand. Finally, just missing out on a lot of your stories all together was my final option. I’ve had deep brooding sessions over what to do, but I’ve come to the conclusion that you mean to much to give up. So, through my confusion, I’ve decided that I’m staying, because you mean that much to me. You’ve brought me through the toughest times, gave me so much joy over the years, I honestly don’t know what I’d do without you now. So I wanted to write you this letter in hopes that you would see it, and consider what I wrote. Maybe we can fix these issues and make things like they used to be.

If you haven’t figured out by now who i”m speaking about, who this great love is, I’ll tell you…it’s COMIC BOOKS! The comic book industry as a

whole. I grew up with you, you’ve been a friend when friends were few and far between. I don’t agree with everything you do, but what two entities in a relationship do? I’m sticking with you just the same, you may not be perfect, but we’re perfect together. I love you comics, always have. . .always will.