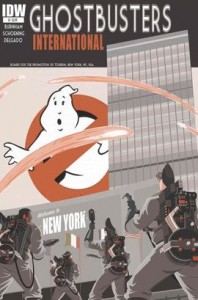 The Ghostbusters have had a long and illustrious run in the comics industry. There have been hiatuses, cancelled storylines, and half a dozen different publishers, but since the franchise fell into IDW’s hands, there’s been a steady resurgence in the ghostly series. Rereleased trades of The Real Ghostbusters comics, new storylines, even crossovers with Mars Attacks and Teenage Mutant Ninja Turtles. It’s been glorious.

The first issue picks up shortly after where Ghostbusters: Get Real and the 2015 Annual leave off. The firehouse is in the midst of major repairs, the Sandman was defeated in the dream sphere, and Janine just got back from Japan after being supernaturally zapped there by a spirit. Pretty much business as usual! The guys now find themselves battling a spectre at The UN when they’re approached by an Icelandic business man who’s got quite a significant offer for them. It’s standard stuff so far in terms of story. A little bland but that’s understandable: they’ve got characters and situations to set up.

Like the other Ghostbusters Ongoing Series the art style in Ghostbusters International is a stylized, exaggerated, cartoon style. Human faces and hair are embellished in size and shape but are kept relatively simple. Otherworldly beings are a stark contrast with details galore. Colours are realistic if not a little muted, the brightest colour you’ll see being Janine’s hair and a box of Cheez-Its in Egon’s apartment. A little disappointing since I’m used to the cartoony colours of The Real Ghostbusters comics, but it works for the direction that this series is going in.

Verdict
Wait and See. First issues of arc storylines are often a tricky grey area. The story is a little slow going at the moment but if Ghostbusters International is gearing up to do anything even half as big as past incarnations of the Ghostbusters have done, it’s going to be one big Twinkie.