Get ready because I’m about to geek out about this book. It may not be for everyone, but it was the first thing that came to my mind as a non-typical Batman comic that is nonetheless an essential read for Bat-fans. Any comic book and Batman fan knows there are certain stories essential to the Batman canon, the must-reads that set the stage for future stories and set the bar for great comic making and storytelling. The Dark Knight Returns and The Killing Joke are the two ultimate examples of game-changing comic book artistry that will forever be crucial components of the Batman saga, as well as Batman: Year One, A Death in the Family, and many others.

In the Dark Knight Returns, Frank Miller forever changed the character of Batman and introduced readers to The Dark Knight, a beefed-up and badass version of the character that had not been seen before. The Killing Joke made headlines again in 2013 when Grant Morrison, on Kevin Smith’s Fat Man on Batman podcast, offered an interpretation of the ending that had readers and social media buzzing for days.  The Killing Joke is known for its exceptionally brutal portrayal of The Joker and its ambiguous conclusion. In fact, at Baltimore Comic Con, Brian Bolland signed my copy of the book. When asked if Morrison’s ending is the REAL ending, the comic icon simply drew a question mark on the last panel. So much for closure. 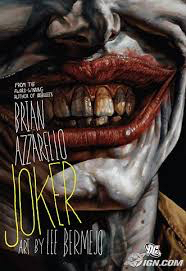 Aside from the essential Batman stories, there are hundreds of others, some well-done and some, not so much. There are, however, some works that, while lesser known, deserve to be set above the masses. Joker is not only one of these stories, but hands down, my favorite Batman tale thus far. The graphic novel, written by Brian Azzarello, with art by Lee Bermejo, was released in 2008. It received generally positive reviews, but was both praised and criticized for the graphic nature of the story.

It’s a self-contained story and can be read without prior Batman knowledge, though it certainly enriches the reading experience. Its hardly an obscure book, but is atypical and has it’s own niche, as its particularly dark (even for a Batman book). Furthermore, despite its relative popularity, I have found many friends who have yet to read it. I make sure to remedy this injustice quickly.

The reason this book is amazing is exactly the reason it sometimes has been criticized. The Joker is at his absolute peak of murderous violence, and unlike many Batman comics where he has a plot or scheme he is attempting to implement, in Joker, he also kills and tortures simply for pleasure, sometimes with no overarching relevance to Batman. He is a study in madness and chillingly pathological.

The second thing that makes this a notable book is that Batman does not appear until the last few pages. These pages, due both to Lee’s exceptional art and the dramatic entrance of the thus far absent superhero, absolutely make this a book about Batman, as well as the Joker. Moreover, it beautifully executes a scene in which the quintessential rivalry between the two is exemplified. The scene is drawn from the a street-level viewpoint, and the reader sees mostly snippets of a blurred Batman as he battles the Joker. This device is extremely effective in creating visual interest, as well as continuing the theme of Batman as a shadowy, omnipresent figure.

The story is told from the viewpoint of Jonny Frost, a small time hustler, who manages to become one o 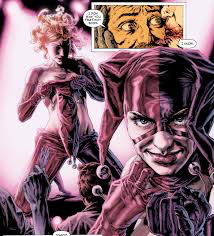 f the Joker’s henchman. Harley Quinn is drawn as sexy as I’ve ever seen her, especially disguised as a stripper, and there is no trace of the silly, lovesick Harley that is often the norm (though I do enjoy the comic and it makes me laugh). She is not a major character, though is definitely portrayed as the Joker’s supporter and lover, though in a more sinister and homocidal role than in other stories. Appearances are also made from Croc, Two-Face, The Penguin, and The Riddler, rounding out the cast of classic characters. There is also a disturbing close-up of the Joker eating shrimp.

Azzarello’s writing creates a dank, dark Gotham, and the character of Jonny Frost, though a hoodlum, is one the reader is somewhat sympathetic to, adding a deeper dimension to the story. He’s in way over his head with the Joker, and knows it, but his desire to be a part of the Joker’s gang ultimately leads to dire consequences. Bermejo’s art is epic, not one throw-away panel. I would frame each page if I could. One of the most mind-blowing illustrations is of the Joker leaving Arkham Asylum. The Joker is not a wise-cracking, long-faced clown, but a well-built, shadowed figure of pure malevolence. It’s fairly well-known image, and I have a poster of it that I’ve kept hanging for years despite my cats slowly scratching it to pieces. 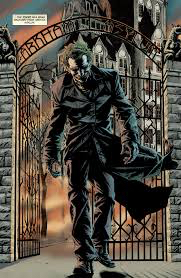 So. The bottom line is, if you haven’t read Azzarello and Bermejo’s Joker (and aren’t averse to graphic and disturbing violence – seriously, TRIGGERS galore) please do so now. Its noir style and brilliantly excessive dark tone make it a noteworthy departure from the typical Bats story, and a must-read addition to any comic fans repertoire.