CBS’s Supergirl series, starring Melissa Benoist, is a hit with many critics and fans, yet DC Comics didn’t have a comic book series on the shelves when the show premiered. Now, weeks after the show returned from its mid-season break, DC has released a new digital first series Adventures of Supergirl. And folks, if you’re a fan in the show, or if you’ve never seen it but are in the mood for a fun action series starring a lady with heat-vision just trying to do what’s right, this is the series for you.

Years back, writer Sterling Gates and artist Jamal Igle did a run together on the Supergirl comic book series that got a lot of fans and later served as major inspiration for the current live-action series. Now, Sterling Gates returns to the life of Kara Zor-El as writer of Adventures of Supergirl, with art by Bengal, and lettering by Saida Temofonte. 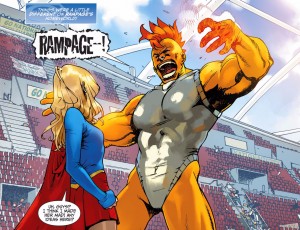 The story starts in the middle of a fight between Supergirl and a woman I’ve not seen in comics for years: Rampage. If you’re a new fan who really doesn’t know who Kara Zor-El aka Kara Danvers aka Supergirl is, no worries. The story gives you a brief overview during the action and also brings in some of her supporting characters from the show: the alien-fighting Department of Extranormal Operations, its director Hank Henshaw, and agent Alex Danvers (Kara’s adopted sister).

If you’re an old hat with Supergirl, this story is still fun and stands as a nice complementary chapter to the show. If you’re an old fan of the run by Gates and Igle, this is a great return to those days as Gates’ love for Kara is clear in every page. He also quickly delves not only into Supergirl’s character via her internal monologue, but into her memories of Kryptonian culture. Superman was raised on Earth, but Kara was already entering her teens when her planet died and she left for Earth. So on occasion, she finds her life in direct contradiction with the lessons she grew up with for over a decade, which is certainly interesting to explore. 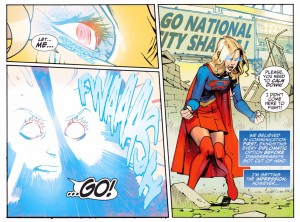 Bengal’s art is clean and colorful, broadcasting a great all-ages atmosphere. And yay for hand lettering! I may sound old to some of you, but lettering is an art form and it’s clear when you’ve got someone who is having fun playing with letters so that you can really hear sounds and voices in your head.

Of course, this comic isn’t for everyone (no story really is). If you prefer the angstier Supergirl of the New 52 DC Comics era, or more post-modern takes, this series may not suit you. If you’re more into moody atmospheres and grit, this may not be your flavor. Which is fine, you do you. For me, it’s great and I’m looking forward to the next chapter.

Verdict:
Go check out Adventures of Supergirl Chapter 1 now and get a subscription already! And if you read it, remember to rate it so that DC Comics knows this is something you like!

Alan Kistler (@SizzlerKistler) is a comic book historian, script consultant and the author of the New York Times Best Seller Doctor Who: A History. He’s a big fan of Kryptonian characters and people who can pull off capes.