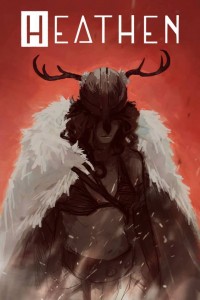 “We Immortals live cyclical Lives, playing out the same drama over and over again.” – Ruadan from Heathen

I would like to start off by saying that this story is about a badass female who is brave with a strong sense of social justice. Oh! And she is Viking! Enough said; Go buy the first volume of Heathen.

On a more serious note, last year between April 6 2015 and May 9 2015, there was a kickstarter campaign about a comic where a young Viking woman is on a self-imposed mission against Odin, the God-King. Thankfully for all of us, this campaign was fully funded and we get to read it’s product Heathen! The story even has a website!

Why all the exclamation points and excitement? Heathen has done something that can only be described as sublime and that seems too simple of a word. This transcends into all layers of the story from quality to presentation and art. The narrative presents endearing characterization and whimsical storytelling. Aydis, the main character, is the best example of this. She is adorable yet brave and filled with mythological stories from the Valkyries to Beowulf.

From birth to where we first meet her,  Aydis’s story has not been a normal one. Yet her story can be a truth we all live through with a twist of the fictional and mythological. Aydis’s bravery against adversity is what pushes her to go beyond societal norms. The story reflects on self-discovery and experimentation that leads for a life of adventure. We have all experienced these kinds of moments in one sense or another and we can relate to the story. Heathen goes beyond that and introduces you to a world that is both historical and mythological. 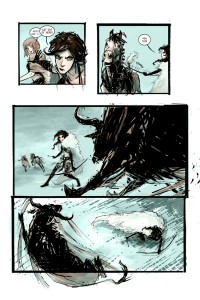 Heathen’s art made me feel nostalgic in a romantic way (the literary kind not the emotional kind). This reflects on Aydis’s view on life. She is a world full of beautiful sentient and non-sentient being but it is difficult and rough. The art shows the beauty through the light colours and shows the difficulty through the rough lines. The art also reflects timelines using the earthy (sepia) tones for the past or a legend being told. This creates a whimsical experience and a fascinating read. I don’t know which part sold me more, the story and how new it felt or the art and how happy it made me feel.

Heathen’s first volume is very interesting graphically and visually as well. It starts with a dedication to the people who contributed to the Kickstarter then a dedication by Geonn Cannon. Also, each issue is clearly marked at the beginning to let the reader know that a marker has ended. It was helpful to see where I could potentially stop and start again. I urge you to read the author’s notes because they give insight into who she is and her experiences. Also Natasha Alterici ends it with a doodle that will make you giggle.

Sammie’s Verdict:
BUY IT!!! As a huge fan of Norse mythology and an even bigger Thor fan, I wasn’t sure what to expect out of this book. As a middle aged southern man, I wasn’t sure what to expect after reading the introduction. But just as I was surprised by Sunstone, I was surprised by Heathen. Fun, endearing, thoughtful, inventive, & caring. My only critique is that a lot of the faces are very similarly drawn. But a good book in any era or place.