Things are ramping up for the return of the HBO mega hit show “Game Of Thrones“, based on the novels in the series “A Song Of Ice & Fire” written by George R. R. Martin, and I for one am more exited than Hot Pie in an Inn on the King’s Road baking Dire Wolf shaped bread! Season Six promises something that hasn’t happened before on the show.  For the first time, the show has pulled past the books it’s based on, overtaking it’s source material. This means the upcoming season will  be navigating NEW territory.  For the book readers, season six will be like ranging beyond the wall as a Night’s Watchman! 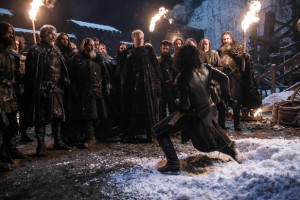 Up until now, the fans of the books have had a head start or an inside track on things as far as knowing what may or may not happen.  The show doesn’t follow the books word for word, but more so as a road map plotting the direction the series takes.  Author G.R.R.M.(or Grrm, as fans so affectionately call him) hasn’t produced the 6th novel in the series yet entitled “The Winds Of Winter“, so the show will undoubtedly have to ad lib a bit to buy G.R.R.M. time to catch up.  Martin has tweeted to his fans on Twitter, and apologized for the delay, expressing remorse for not meeting the deadline to have the book out by start of the upcoming season.  He’s also sworn that he understands the fans eagerness and is feverishly working on finishing the next book soon. One good thing about the delay is that it dampens the bickering between two camps that have formed since the show aired back in April 2011.  The book readers and the show watchers have feuded like the Night’s Watch and the Wildlings over the past five years, each wanting the show to include or cut out certain aspects of the book.  With the show and book at the same place, neither group has a reason to boast their sides right to being the correct side. 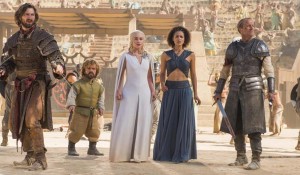 As for the show, the saga continues, and as the Starks love to say…”Winter is coming…“.  After last season’s finale, we were left with more questions than there are Unsullied Soldiers.  What’s in store for us this season, well here’s a list of the Top Ten Plot Points from last season and where they left off…

The good folks over at HBO have released the first promo’s for this season of Game Of Thrones.  There isn’t any real show footage, just flags from certain houses(worn and tattered insinuating ominous things to come) accompanied by voice overs telling a little about what will be a great season…here are the promos, enjoy and get ready for the return of HBO’s Game Of Thrones this Spring!