DC’s Legends of Tomorrow has been one of the most anticipating new shows of 2016 for months now. And boy did this premiere ever deliver! The CW Universe of The Flash and Arrow has been building up to this all season long and this show is everything I wanted it to be and more. It was like watching an episode of Doctor Who with a bunch of superheroes! If that doesn’t sell you on this show, I don’t know what will! 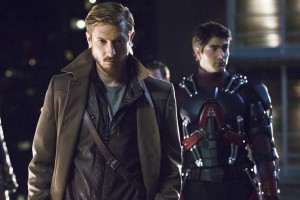 The pilot episode starts off showing what the world looks like now that Vandal Savage has taken over. It shows the path of destruction that has been left and just how heartless and power hungry he is. We are then taken to the Time Master’s Council where Time Master Rip Hunter, played by the one and only Arthur Darvill (Rory on Doctor Who), is pleading to the Council for them to allow him to go back in time so he can stop Savage before he takes over the world. We then see a beautiful montage of Hunter gathering his team of ‘Legends’ by kidnapping them. This team consists of Ray Palmer aka The Atom, Sara Lance aka White Canary, Jefferson Jackson & Dr. Martin Stein aka Firestorm, Hawkgirl & Hawkman, and Captain Cold & Heat Wave. Rip Hunter then convinces this rag tag group to join him on his mission to take out Vandal Savage once and for all. But not without a little thought from each of these members. Ray Palmer has a little chat with Oliver Queen, Sara talks to her sister Laurel, Hawkgirl and Hawkman duke it out, and Dr. Stein drugs Jackson and forces him to come. But eventually they all agree to join in on this mission.

Their first step in achieving this mission is to travel back to 1975 to talk to Dr. Aldus Boardman, the expert on everything Vandal Savage. However, things change when we find out that not only is Dr. Boardman an expert on Savage, Hawkgirl and Hawkman, but he is also the son of one of the incarnations of Hawkgirl and Hawkman.

While Hunter, Palmer, Stein, Hawkgirl and Hawkman are off talking to Dr. Boardman, Sara Lance, Captain Cold and Heat Wave decide to go out and have a little fun in 1975. What does that fun look like? Oh, you know, the usual bar
brawls and alcoholic beverages. This was by far one of the most entertaining scenes in the entire episode. Pairing up Dominic Purcell and Wentworth Miller on screen again was absolute genius and their chemistry on screen was incredible. 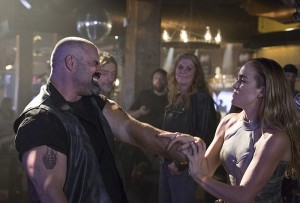 ry wrong turn when the Time Master Bounty Hunter named Kronos, shows up and tries to take out the entire team. What we eventually find out is that Rip Hunter lied to the ‘Legends’ the whole time about what was
really going on. Hunter was no longer a Time Master and was actually being hunted by Kronos for going back in time and breaking the Time Master rules. What was Hunter’s motive for hunting down Savage? Well, we find out that the
mother and son that were shown murdered at the beginning of the episode were actually Hunter’s family. This scene really tugs at your heartstrings and makes you feel for Hunter and helps to win favor with the team. Fortunately for him, the ‘Legends’ were able to see past his initial lie and get behind the true meaning of his mission. Which is to take out the most ruthless, violent killer the world has ever seen.

The beauty of a show like this and w 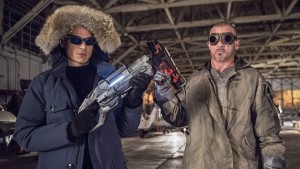 hat CW has been doing as a whole, is that while the character development wasn’t super in depth in this pilot, it didn’t need to be. The Flash and Arrow have been introducing some of these characters for over a year now. And it definitely helps you as the viewer get into the show that much easier. On the other hand, for those who have not been watching The Flash and Arrow, there was just enough back story to get you hooked while still leaving the door open for more development in the future.

Verdict
Watch it! This was one of the best pilots for a superhero show I’ve seen to date, and I think part of that has to do with the world the CW Universe has already created for us. Legends of Tomorrow was seriously like watching a comic book come to life and it has something for just about everyone. From fantastic action to far out sci-fi. From the laugh out loud moments of Captain Cold and Heat Wave to the heart tugging murder of Hunter’s family. If you are a fan of superheroes and sci-fi, this show was made for you!