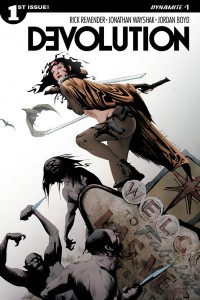 Here he comes, Papa Remender, releasing another dystopian sci-fi book with a female lead, what kind of hijinks will she get up to in this dangerous post apocalyptic world?!

It’s not that I’m complaining (well, not about the lady lead at least) more women as protagonists is not only good for the industry, but for our culture in general. The representation of women in media, especially in “boys clubs” like comics, is so, so important. I’m just saying it’s suspicious. By shouting “Look at me! Look at me and all these strong female leads I can write! Such depth, much character development!” it’s almost like Remender is trying to sweep a certain bad reputation under the rug… — Excuse me one second, I have to get something from the fridge… Mmm… That is some good tea. — At least he’s trying, right? Alright, back to it.

Devolution follows Raja, a lone woman surviving her way through what was formerly Nevada in a world newly populated by, literally, neanderthals. Raised by an extremely religious father, she’s on a mission (not from God) to save the human race. Now let’s back up for a bit because this is hilarious — I mean important. After a scuffle between Raja and some cavemen over a map our lovely narrator decides to grace us with some extensive world building exposition akin to the classroom scene in a bad anime. In a tirade about how shitty and stupid our culture that only Papa Remender can deliver, he explains how our world got to such a sorry state.

It’s here I’d like to take a little aside, because I don’t entirely disagree with his criticism of our current cultural and socio-political state, but like the entirety of Tokyo Ghost #1 (another recent Remender sci-fi) that is rife with underlying themes of “curse those kids with their cellphones and dank memes!” Papa Remender’s explanation of how the apocalypse went down is lousy with an entitled superiority that usually only comes with the everyday wearing of a fedora.

Anyway what ends up happening is a government funded biological weapon meant to devolve the “faith” centers of the brain has unintended side effects (who would have thought?) and — here’s the funny part — and literally physically and mentally devolves anything that contracts the mutagen into their “primal ancestors”. So humans become neanderthals (sure), elephants become wooly mammoths(?), birds become pterodactyls (I guess!), and the giant furry mutants with large teeth were presumably New York City rats. Hell even the plant life is different, but who cares about sketchy science. Now even with this airborne mutigen having infected most of the planet, there are still “sapiens” like our heroine Raja the, let’s call it “rustic”, camp of gun toting confederate redneck neo nazis she attempts to barter with, and (hopefully) a lab in San Francisco working on a cure. It’s at this camp that things start to get dicey for Raja, and, possibly more worryingly, the plot devices Remender uses to create drama.

Let’s get to the art, because boy is it gorgeous. Wayshak’s art is incredibly beautiful and refined, it’s definitely a style I can get into. The most eye popping thing about it is the way he uses his style of cross hatching to create definition and depth in the darks and shadows of a scene. Wayshak uses his shading to not only accentuate the extremely fine details that come with being comfortable and capable with your craft, but accentuate action and tension in various scenes. I can only imagine how painstaking a collaborative process with Boyd, the equally capable colorist, must have been because none of that definition or depth of the cross hatching is lost in the colors, only brought more to life. The deep charcoal blacks give this book’s art a gritty and visceral texture that leaves your jaw on the floor.

Verdict: Ehhhhhh….
This comic’s art is gorgeous, so gorgeous I wish it didn’t contain some of the narrative pitfalls Remender’s writing can be known for. That said, it unfortunately does, and in what already feels like an extremely short first issue lacking in depth of story and direction. A good portion of the issue is a flashback or completely unnecessary and we have no time to relate to, project onto, or even feel empathy for the main character. She’s kind of just there, along with everything else. Scenes seem to be slapped together with a hard cut only connected by notions like “sure, I guess this happens next”. Thing is this is a five issue mini series so the lengthy exposition and set-up can be somewhat forgiven with the excuse that it was necessary and we’ll get to the good stuff like character and plot development in the coming issues. There is a hint of a decent sci-fi story here, despite the utterly ridiculous (and hilarious — not the good kind) premise, Remender has done well by the genre before. I’m gonna stick with this book at least till the next issue, and that’s almost solely based on the art and the fact that I’m a story completionist. I work at a comic shop, so I have that luxury. For those that don’t I say give this book a pass unless this is something you’re super stoked on. My main concern is that this will turn out to be a Walking Dead clone with an emptier story and a fuller fridge.