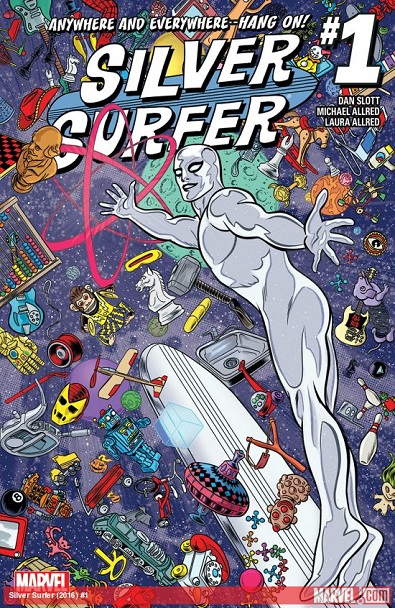 If you happened to catch any part of the Talking Comics Best of 2015 Awards shows chances are you heard high praise for the Marvel NOW! Silver Surfer series by Dan Slott and Michael Allred.  Silver Surfer was celebrated as an inventive and original series that had outstanding art and was full to the brim with charm, cleverness, and humor.  Fortunately, the comic survived the events of Secret Wars and has now returned. With high expectations and eagerness, I couldn’t wait to seize to the opportunity to check out the series with the launch of All-New, All-Different Silver Surfer #1.

First off, even with limited exposure to the previous run on Silver Surfer by this all-star creative cast, I can tell you that this series isn’t so all-new and isn’t very all-different. Like so many other All-New, All-Different Marvel titles, Silver Surfer appears to be a direct continuation of the previous series. Personally, that is fantastic news because this series was already so delightful, fresh and unique. (Turns out we are all just a bunch of suckers that really enjoy the number one.)

Admittedly, this first issue is more about serving as an entry point for readers looking to jump into the Silver Surfer story than it is about advancing a very deep and well characterized plot line along.  However, what lacks in deep and rich story in this first issue is made up for with the outstanding Michael Allred art, vibrant eye-popping Laura Allred colors and tons of light hearted comedy, charm, and wit.  Dawn and Silver Surfer steal an incoming alien broadcast to announce to her father and twin sister that they are returning to Earth.  However, upon their return the adventurous pair face an alien threat that is attempting to steal all the culture, art, and literature from Earth.  The end result is a witty and humorous pop culture megabomb that is a delight for the eyes from cover to cover and which will surely leave a beaming grin across your face the entire time you read the issue. There is a plethora of pop culture references and hidden gems throughout this entire issue and I had a blast trying to figure out as many as I could.

For those interested in checking out Silver Surfer #1 don’t hesitate to jump into this very light-hearted, fun, and approachable comic.  If you do decide to jump in, I highly recommend you go back and read the brief, but fantastic previous Marvel NOW! series (some advice I am following myself). Spending the afternoon binge reading the entire previous series will not leave you disappointed and should only provide for further enjoyment of what has yet to come from Dan Slott and the Allreds.

Buy It – Although the adventures for Dawn and the Surfer may be new, the series seems to  pick up exactly where it left off, chock-full of eye-pleasing visuals, wit, charm, and humor.  This lighter “first” issue is a great introductory point for new readers but will provide a comfortable and welcoming feeling for previous fans that have anxiously been awaiting the return of this space traveling duo. New fans of the series and long time readers alike will both enjoy this wacky pop culture stuffed issue.