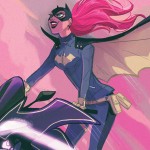 Batgirl has been fighting the foes of graduate students and superheroes alike: stress and sleeplessness. Given that she’s a grad student and a superhero (seriously, how does she do that?), she’s got a double dose. She’s forgetting things (which, for someone with an eidetic memory, has not be disconcerting), she’s doubting herselfm and she’s plagued by nightmares of a super creepy something or other staring into her soul. Not only that, but she’s become embroiled in a gang war, her research is possibly being hacked by the police, and she has an old friend crashing on her couch, a friend who has shown up out of literally nowhere and does NOT get along with Frankie. Thank goodness she has some help: Frankie is now officially her partner, and Spoiler (Stephanie Brown) and her pal Bluebird are there to help Babs track down the information leak.

This issue is definitely a “middle of the story arc” type of comic. While Babs tackles the immediate problem and has her team-up, Stewart and Fletcher are hinting at a mysterious threat. Unfortunately, the issue has somehow managed to combine everything I don’t like in superhero storylines: gang wars, the hero having unreliable memory and self-doubt, team-ups with characters I don’t particularly know, and fights coming from seemingly out of nowhere. The whole plot of gangs forcing people out of buildings (introduced in the previous issue), with mysterious people helping out Batgirl and mysterious goings-on at the police station… It all seems needlessly complicated. I’m also a bit uneasy that this story arc almost feels like a retread of the previous major arc, only now instead of there being imposter Batgirls, there’s someone who is making Batgirl not trust her own memory. I’ll have to wait and see how this all pans out, but right now I’m a little underwhelmed.

That being said, there are some nice moments in this comic. The conversation between Barbara and her father, with Jim Gordon sporting the bruises of his Batman lifestyle, is really nice. Stephanie Brown is delightful, and I can’t help but hear our own Stephanie Cooke’s voice whenever she talks. Carlini and Moritat do a good job of keeping the Babs Tarr style in the book, and LaPointe’s colors give the book a vibrant energy. Frankie now has a more active role in the book, as well as a callsign, so I’m interested to see where that goes.

I’m a little frustrated with where Batgirl is going, but I’m not ready to give up yet. Pick it up if you’re following Batgirl. Otherwise, you might want to wait for the trade.