It has finally arrived! The new Poison Ivy solo series that we’ve all been waiting for. And it’s good. Amy Chu delivers a great first issue filled with action, adventure, and Harley Quinn. As if you didn’t need any other reason to pick this book up. 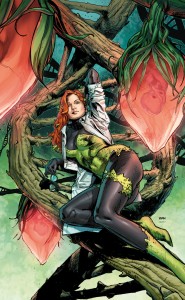 This first issue follows Dr. Pamela Isley in the desert as she discovers what is called the Living Fossil, a plant that is thousands of years old. She is now a researcher at Gotham Botanical Gardens trying to turn her life around and be taken as a serious scientist. However, she didn’t plan on Harley Quinn showing up with her usual antics. When they get into a fight that, at least for the time being, breaks up their friendship, Isley makes a breakthrough discovery that she can’t wait to share with her research partner Luisa Cruz. But we she shows up the next day to share the news, she discovers something has happened to Cruz.

Poison Ivy is a character that I have long been fascinated with. Mostly because even though she is, throughout most literature, considered a villain, she always seems to walk that fine line between good and evil. She has convictions about nature and her plant friends that some people might find admirable. While at the same time using the powers that she has for her own selfish desires. When I heard there was going to be a new Poison Ivy solo book, I was pretty excited. And this first issue definitely lived up to my expectations.

Amy Chu, still a fairly new creator in the comic scene does a fantastic job of giving new life to the character of Poison Ivy. She does a great job of helping you connect with Ivy, and at several points had me actually cheering for her! The dialogue was fantastic, the narration was great and overall the writer was top notch in this first issue. Clay and Seth Mann’s art also blew me away. The life and vigor that he brought to each of these characters was absolutely wonderful and made this book an absolute joy to look at. 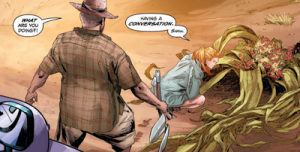 The Verdict? BUY IT! This is only a 6 issue mini-series, but it needs to be on everyone’s pull list, especially if you are even slightly a fan of Poison Ivy. I’m so excited about the depth that is going to be added to this character in issues to come and the twist ending got me hooked. A must read and a home run from DC Comics.