Of the 45 titles announced to take place after Secret Wars, I was most excited about Patsy Walker, A.K.A Hellcat. I’m in love with stories about superheroes that take place in the day-to-day. Sure, Hellcat has an impressive set of abilities and powers, but what happens when she has to pay rent?

Maybe it’s a sign that I’m getting older, but I’m really interested in how superheros pay their bills. 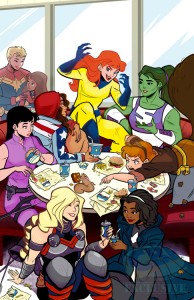 The second issue of Patsy Walker, A.K.A Hellcat (or PWAKAH, as Joey Braccino so elegantly put it) opens with Patsy working retail. Her job is an unmitigated hellscape, complete with a 17 year old boss and a gaggle of pre-teen patrons. The dialogue could easily slip into the inauthentic but, thanks to Kate Leth’s spot-on writing, every line reads true.

So let’s talk about Keth Leth for a minute. She started out in webcomics but began writing back ups for Locke & Key and Luther Strode before moving on to writing Adventure Time: Seeing Red. She’s an amazing comics creator and an advocate for women in the comics industry and, thank god, Marvel hired her to write PWAKAH.

Every once in awhile the comics industry gets it right.

The script is supported by an art team that perfectly matches its tone. Williams and Wilson create a cartoon-heavy style with saturated colors that pay homage to both the superhero and “Life with Archie” comics that originally inspired Patsy Walker. And, while this issue takes place primarily in a shopping mall, Williams’ art is fully capable of maintaining pace in fight and action sequences.

In other words: this comic is super fun.