We’re now less than two months away from the second season of Marvel’s Daredevil, and the Netflix series is anticipated by a lot of people. The two big selling points for this season are the arrival of Elodie Yung’s Elektra Natchios, a longtime love interest/enemy of the Man Without Fear, and Jon Bernthal of Walking Dead fame as the Punisher, who may or may not be getting a spinoff series of his own. Recent rumors have been swirling around for a while, but Netflix responded this past weekend officially with “any character that’s in [the Marvel Netflix series] is on the table…It’s always possible. All the characters in the universe could also spin out.”

The Punisher, for those who don’t know, is an ex-cop named Frank Castle whose wife and children were murdered during a mob shootout in Central Park. Frank later decides to go on a one-man war against crime in general by using his war training, guerrilla tactics, stealth, and nearly every gun known to man. You know how people joke about Batman being a psychotic thug who beats people to near death? Well, Castle is more or less that, with enough firepower to rival most military contractors. So yeah, calling it now: they’re more than likely expecting him to be the breakout star of the season, and it really wouldn’t surprise me if come August or September, they reveal they’ve got a showrunner for a TV show. 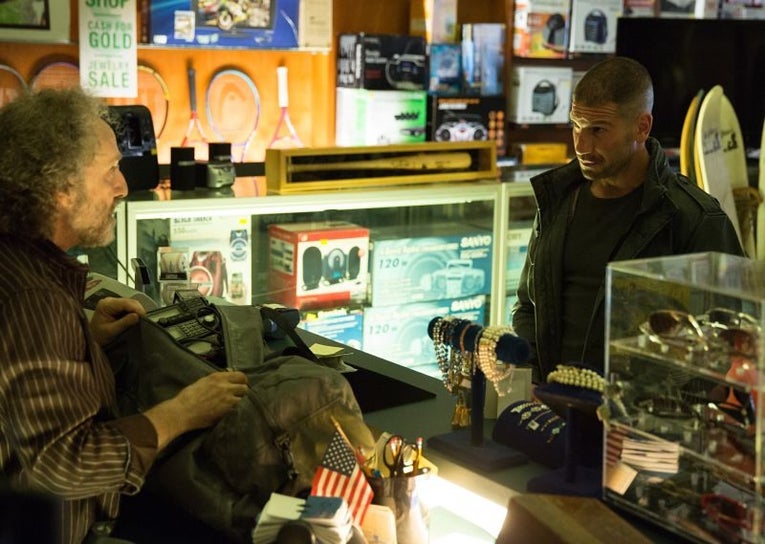 I’ll admit than I can kind of see the appeal in having a TV show about the Punisher. He perfectly fits into the world that the Netflix shows are sharing–a much more darker and mature (so far) landscape than what the films have been doing, vigilantes who are a lot more reluctant to step up to the plate of heroism–and his whole thing of a one-man war against crime is an easy sell for a TV show. It’d more or less be a 13-hour marathon of The Raid 2 with double the guns and violence, possibly in the vein of War Zone. And in case, you’ve forgotten that movie…

That having been said, Punisher’s over the top violence may also be the thing that could hold it back, should a show actually be a thing. While the Marvel movies more or less have different feels and tones and Daredevil and Jessica Jones share the latter to an extent, it feels like a show about him may skew too hard towards the “dark and edgy” route. Even though he’s been around since 1974, there’s no denying that the character has a largely late 80s/most of the 90s vibe about him, from his origin to his skull faced outfit. Violence is all well and good, but 13 hours of punches, gunshots, and bloodbath after bloodbath can get old after about hour 4 or 5 of watching someone’s arm get shattered before their gun is used to make the wall behind their friends look like someone started a massive food fight at the Olive Garden. And considering that 90s comics are generally not looked back on fondly, that may be a tough hill for him to climb over.

Perhaps more problematically, the Punisher’s existence right now hits a bit too close to home for a lot of marginalized people. A white guy with a shitload of guns killing anyone they don’t like because their family is dead and largely getting away with it is more or less any white guy at this point in America. Hell, the family probably doesn’t even have to be dead for them to just walk around with all those guns. Like a white Peter Parker in the MCU, his default race just doesn’t work in this day and age when white men largely aren’t persecuted or face any real threats against their lives like others do. Given what he represents, people have a reason to be uneasy around those who say they’re big Punisher fans, and it’s hard for him to have the same “edgy” impact he does now because a white dude killing people with zero repercussions is basically called “the police”. It’s too late now that Bernthal is locked in the role, but maybe casting a man or woman of color would’ve been something different than what’s basically a walking Grand Theft Auto character.

So, Punisher in Daredevil? Could be cool. Him in his own solo series? That may be a bit of an uphill battle to get people on board with. Could always do a TV show on Squirrel Girl or Amadeus Cho!