Before I begin this retrospect let me give you a little disclaimer of sorts. I love this game. Madly. Deeply. As I mentioned in my first retrospective, Crimson Butterfly was the first game I ever played in the series. I’ve written poetry about it. I replay it constantly on easy right through to nightmare. I even wrote a full screenplay adaption of it for my writer’s craft class in high school. So yeah, I’m going to be biased. This whole retrospective is going to be a big, squealing, fangirl affair. Prepare yourself. 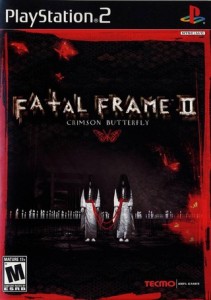 “Didn’t we always promise each other… that we would always be together?”

Fatal Frame 2: Crimson Butterfly begins with twins Mio and Mayu visiting a childhood play-place in the woods before a dam is erected that will destroy the whole area. The spot holds some bad memories for the girls and while Mio is distracted, Mayu is lured into the woods by a brilliant crimson butterfly. Mio follows and the two girls quickly find themselves spirited away to The Lost Village: an urban legend proved true. Due to a failed ritual, the village was cursed. Perpetual night darkens the sky, hostile spirits roam, and anyone who enters the village is never seen again.

So begins the second installment of the ghostly horror franchise, and does it ever escalate quickly from this point on! And yes, I know, it sounds awfully similar to the first one, what with the haunted place cursed from a failed ritual with a zero survival rate if you enter. Like any good sequel though, Crimson Butterfly ups the stakes. The danger Miku faced in Himuro Mansion is almost trivial compared to what Mio and Mayu have to go through. Why? There are more ghosts that have more tricks, more locations with more hidden stuff, more camera functions for more upgrading, and more drastic reasons for wanting to get the hell out of The Lost Village.

Let me talk about that last point first. In Crimson Butterfly you’ve got yourself to protect plus your disabled sister. From what you learn during cutscenes, Mio is protective of Mayu due to an accident as children (that she inadvertently caused) that left Mayu with a permanent bum knee. You’ll also discover rather quickly that there are some ghosts in the village that realize you’re different from other people that have wandered into their cursed town. In the first Fatal Frame you have nothing to do with what’s happening around you. The events that cursed Himuro Mansion have come and gone and you’re witnessing the aftermath. You’re a passive bystander trying to survive the circumstances that were thrust upon you. In Crimson Butterfly the ritual that cursed the town is on a loop, repeating over and over. These ghosts are hoping to change their circumstances. And the mysterious ritual they must perform? It has to do with twins.

Playing as Mio, you find yourself narrowly escaping spirits that believe you’re the twins that botched the last ritual, working out the mysteries surrounding other people that had found themselves in the village and died, and struggling to avoid a very powerful, very angry ghost that seems drawn to Mayu.

Like all the games in the Fatal Frame series the ghosts each have different patterns they follow. An interesting addition to their patterns is that a lot of the ghosts come in groups. There’s a good chance that when your camera filament begins to glow red you’ll be fending off more than one spirit. Of course sometimes your filament won’t glow at all. You could be minding your own business and come upon a piece of landscape you’d like to take a picture of. Those crimson butterflies are lovely, you’ll say to yourself. Bringing your camera up to your eye you’ll find that where there was no ghost before suddenly stands one. And it’s attacking you. And you’ll scream. And your best friend sitting beside you will scream. And for the rest of the night you’ll giggle and reminisce about how funny it was… but you’ll be just a little dead inside, your sense of whimsy gone, your mind weary of what else lurks within the town… I may be drawing on a personal experience, why do you ask?

If you haven’t gathered yet, your one and only weapon is once again the Camera Obscura. This time around though it’s had some nifty and/or neato improvements and collecting spirit energy and points offers a host of upgrades. One of the most helpful improvements is the metre that charges to give you more powerful shots. Instead of charging up shots based on how long you can keep the ghost in frame, it charges a more powerful shot based on how close the ghost is. This is amazing for three reasons: ghosts that teleport/disappear aren’t a total crapshoot anymore, getting the option for a fatal frame shot isn’t tied to keeping the ghost in frame, and it allows you to play offensive with a few of the ghosts. Going into battles and actually having a little more control makes all the difference. I always feel like a total badass when I’m able to charge at one of the big baddies instead of delicately skirting about waiting for a charged up shot.

That minute feeling of control also rolls over into the many items that are scattered throughout the village. Unlike the first one this game offers up herbal medicine (who would just start popping random pills they find in an abandoned village?) and film like there’s no tomorrow. Playing on easy you can collect something huge like fifty herbal medicines that can then roll over into your next game with new game plus. So helpful! You also don’t have to wait until beating the game to unlock special camera functions, you just have to naturally progress in the story! Most helpful has got to be the little red dot that tells you when you can take your most powerful shot: a fatal frame. It’s a beautiful thing, but then again, I’ve always been a whore for the upgrade.

I’ll tell you what I’m not a whore for though. Escort missions. Is there a single person on Earth that likes escort missions?! Unfortunately as soon as Mayu is with you your life becomes one. On the bright side, what I’ve dubbed as the Mayu Mechanic lets you get some pretty bitchin’ pictures of the ghosts as they tend to go straight to her. Just snap those pictures before she dies. Apparently that’s bad. I can’t imagine why though. Seems only fair you let Miyako have a go at her for all the times she’ll pin you into a corner and won’t get out of the way no matter how much you’re yelling ‘move bitch, get out the way!’ at her from your living room! Seriously, it’s a relief when she eventually ends up back in the ghosts’ clutches!

From the worst part of the game to the best we’ve come at last to the story. Besides the increased scope of the narrative, there’s an increased depth to it. It’s amazing how hard the story hits you once the final cutscene wraps up. Like the first game, you have to forage for the finer points of the lore to clearly understand everything that’s happening. The themes clearly presented during minimal searching are love and sacrifice: just like the first. But it goes deeper than that. There’s resentment and guilt in a sort of ‘damned-if-you-do-damned-if-you-don’t’ series of events. There’s resentment from always having to be the stronger twin, but also guilt because you are ultimately the reason you have to be the stronger twin. There are also cutscenes and diary pages concerning most of the hostile spirits in game. There’s a new mechanic called a Spirit Radio as well: it replaces the physic powers from the first game. Every ghost you fight will leave behind a small crystal that has their thoughts impressed upon it. Guaranteed there are at least three that pull on your heartstrings.

Speaking of guarantees: the scares. In comparison, the first one comes in at a mild spooky on the Fright-O-Metre. Tensions are high in Himuro Mansion, don’t get me wrong, but you’ll never really feel nail-bitingly scared. Crimson Butterfly will have you gnawing past your nails right down to your knuckles. I’m a veteran player and chapter seven of this game still freaks me out. Let me paint you a quick picture of that chapter. One of the big baddies is hot on your tail the whole time with a one touch kill and a labyrinth that you need to make your way through. The camera doesn’t work on this ghost, not that you have your camera because you’ve dropped it. You see snippets of your sister moving throughout the house but there’s something very wrong with her. And there is a cutscene where you crouch in a closet… oh god don’t make me relive it! If I know what’s going to happen there and I still feel the anxiety of the experience coil around me, imagine how it feels your first time through the game. Scares are abundant. Trust me on this.

So what’s the verdict? Do you remember my rating scale from the last retrospective? The survival horror scale of: story, frustration, and which one outweighs the other. With Crimson Butterfly story outweighs frustration. Remember though, I’m 100% biased with this game! My frustrations are a thing of the past because I love this bloody thing so much!

Whereas Himuro Mansion in the first game stands as a typical ghost story of one haunted location with one big, bad ghost pulling all the strings, The Lost Village, with its dozens of indoor and outdoor locations, ghosts that haunt in packs, and not one, not two, but THREE big baddies, it towers over Fatal Frame 1 like it’s popping ghost steroids! Looking at it objectively (or as much as I can) there’s frustrations to be had. The Mayu Mechanic has little to no charm behind it and there’s quite a bit of backtracking within the village as you fish around for an object that will get you into the next bit of the town. Of course Mayu is integral to the plot and the backtracking as well. There’s even a helpful ghost that will help you if you lose track of what the hell you’re supposed to be doing within the village.

Does the joy of uncovering the story still outweigh the flaws? Hells yeah!

So play Fatal Frame 2: Crimson Butterfly. Deja vu with that statement, but it’s unavoidable. You don’t have to write fanfiction afterwards, you don’t have to spend hours reading wiki pages, and you don’t even have to ship Yae and Itsuki (although I don’t know why you wouldn’t because they’re clearly meant to be together), but you’re missing out if you don’t experience this terrifying ghost story first hand.

Still with me? Haven’t become trapped in The Lost Village? Or bound in ropes at the Himuro Mansion? Well, that means one thing: tuck yourself in and go to sleep, the Manor of Sleep in Fatal Frame 3: The Tormented is next. Sleep tight till then. 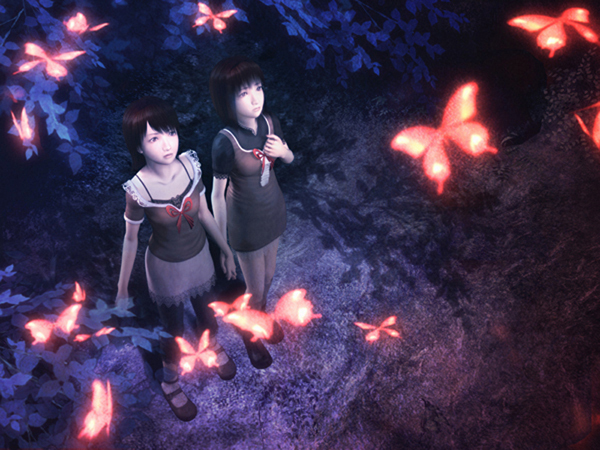