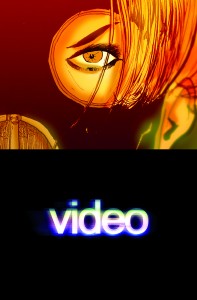 I love stories set in post apocalyptic worlds. Many readers will say that it is becoming tired and there is little new to be done with the setting, I’ve even heard some say it is a cop out to have an environment with fewer characters and less rules to work within—and those things are true for some—but when done correctly there is a built-in drama and an atmosphere that can be harnessed to create an amazing story. The genre is only as weak as its story, but this works even better if the creators remember that those left behind, the unfortunate ones who still populate the world, must be interesting.

“Please stay tuned for a message from your savior.”

Video is a 2004 publication running five issues (152 pgs.) that was later collected into graphic novel form two years later. The story follows Keisha Bell and friends—her boyfriend Jessie, as well as Katy, Pepe, and Maryann round out the cast as they face the world ending second coming of Christ. The son of God has returned and claimed that he will take the believers back with him in forty-eight hours, which of course inspires all kinds of chaos. That is just the setup though, as the characters will soon be forced to deal with the situation head-on when they learn exactly how connected they are to everything. 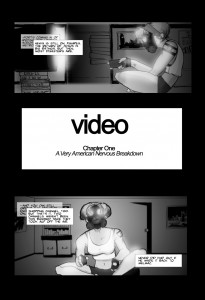 The story and art were handled by Stephen R. Buell, better known by his stage name of Steve Here, where he and a well-bearded gentleman named And Larson take on YouTube under the Machinima banner. The story is good, especially through the first three issues, containing an engaging opening. There is a solid pacing that hits a sweet spot until that fourth book where it becomes a bit more convoluted and the perspectives get a tad hard to follow. A plentiful helping of flashbacks and jumps help to fill out characterizations and story details, but can be just the slightest bit jarring in areas. The ending is a bit abrupt, leaving a lot of questions and the door open for much more. Overall though the story is tight and has a great feel to it, reminding me of Way’s The True Lives of the Fabulous Killjoys and Ennis’ Preacher. The author claims that if there is a source that inspired this though it would be Channel Zero by Brian Woods, but whatever it is, Video feels like a good mix and a breath of fresh air unaffected by its age. It’s a tinge of irreverence with a small bit of humor, containing a few pop culture references thrown in—he really likes Alf. The religious aspects are handled well while not being preachy in any way and the violence feels immediate and sincere. 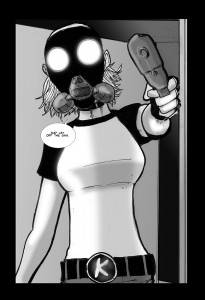 As I stated earlier though, what makes this world work is the individuals who are trying to take it on. These are characters loosely based off of real people—noted by the acknowledgements on the last page—which is probably why they start off feeling like each one could have fallen into archetypical trap, but are incredibly real by the end. Part of this is because of their relationships. The characters share connections that are deep and balance each other on their own emotions and what the others are going through, creating a natural tone in scenes. The drama is at just the right amount, never underselling or overdoing any of the scenes, even the ones I thought deserved more. The dialogue helps this by being limited and never stiff or awkward. The only character this doesn’t apply to is Maryann, who is given almost no attention after her big scene and is not utilized in the last couple of issues.

The art style is white and black on predominantly black pages, giving the book a dark and depressing feel, accenting the serious tone of the story. The lines are a bit wavy and the faces looked slightly odd to me at first, but that seems to be Steve’s style. Some may find the art to be the weak point of Video, but I enjoyed his work on facial expressions and how the characters were positioned in frames. It reminds me of stuff like A Voice in the Dark, where the characters don’t blend into the background and show importance, even though there is no color. There are some excellent extra sketches in the back of the collected edition with a few notes that discuss how some of the images were changed and shaped up, which gave a good insight into what the creator was going for.

“The return of Jesus is big ratings, but then, most disasters are.” 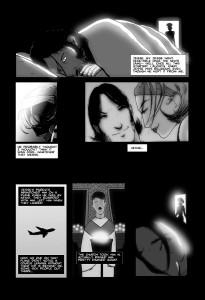 Not only was I glad to see I was right, the Shopping Network will never stop broadcasting, I reached the end of the book feeling a loss, wanting the story to continue, and more importantly to see how the characters grew with each other. Video is in no way perfect, but I have to wonder what could have been had Steve not become burned out with the series. This book is still available, but there are many indie comics done with one man teams like this suffering in obscurity. Steve has a ton of potential and surprised me a bit with his storycrafting, making me want to see what he could do with a little more help and a longer run. More of stuff like this, where it is easy to connect to the characters and embrace the world keep me looking for new titles.

I spoke to him recently and found out that there will be new works coming soon, even if it isn’t a continuation of this one. In the meantime he has a few other books readers can look for like American Juice and Fragile Prophet, which I will be picking up myself soon. I needed to take the time first though to let everyone else know to check this one out for something a little different.